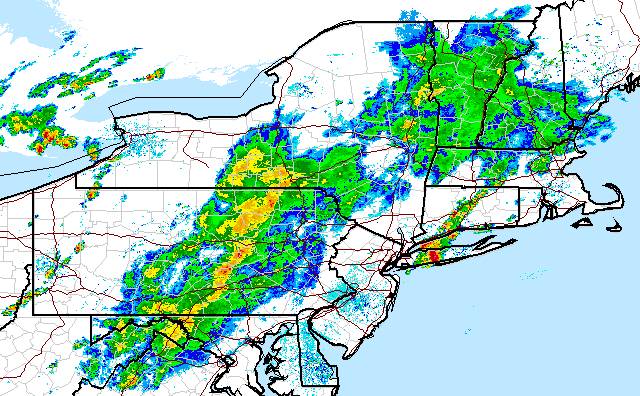 Current radar image from the National Weather Service
A cold front has been slowly approaching the city since last night. The front is going to take all day and probably all night to move completely through the area. Little waves of low pressure like to surf along the frontal boundary. Those waves are likely to kick off showers and thunderstorms from now until tomorrow night. Given how thick the air is with moisture, some of those storms are going to contain periods of intense rain, gusty winds and possibly hail. The likelihood of intense rains has cautioned the issuing of a flash flood watch this afternoon through tomorrow. More ominously, as the day progresses conditions might approach those needed to produce an isolated tornado. The high today will be in the sticky low 80s.

The front is moving so slowly that showers and thunderstorms are very likely tonight and tomorrow. Again some of those storms could be intense. Several inches of rain could fall by Thursday night. Friday should be the one sunny day of the week. Expect a high in the mid 80s. The weekend currently looks like it will feature scattered showers.

Elsewhere, the tropics have suddenly become very active. Tropical storm Cristobal managed to stay offshore and is now headed toward the middle of the North Atlantic. The eye of Hurricane Dolly is about to make landfall just on the Texas side of the border with Mexico. In the eastern Pacific, tropical storm Genevieve is expected to strengthen into a hurricane over the next couple of days, but it is headed away from land.

#flash flood
#humid
#rain
#showers
#thunderstorm
#weather
Do you know the scoop? Comment below or Send us a Tip
A new Gothamist is coming! We’ve moved comments over to our beta site. Click here to join the conversation and get a preview of our new website.