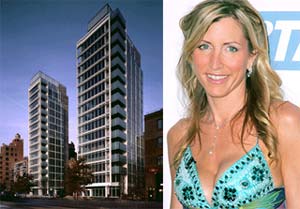 West Village residents may need to get ready for an onslaught of British paparazzi: Rumor has it that Heather Mills, ex-wife of Beatle Paul McCartney, is buying an apartment at 173 Perry Street.

The Richard Meier-designed building, which has had a number of famous buyers, including Calvin Klein and Nicole Kidman, is right on the West Side Highway, and the $5 million apartment faces the Hudson River. It has two bedrooms, two bathrooms and two balconies--here's the listing--and at 1,800 square feet, that translates into a steep $2,777.78 per square foot.

The Post notes the listing broker would not comment on the sale, but the listing does say a contract has been signed. And the $5 million buy would be affordable for Mills, who has apparently been hunting for a NYC apartment ever since getting her £24.3 million divorce settlement--that's like $47 million in US dollars!

Fun facts: Mills' ex-stepdaughter, fashion designer Stella McCartney, has a store on West 14th Street, just half a mile away. And McCartney himself is dating someone with a NYC-connection, MTA board member and transportation executive Nancy Shevell.