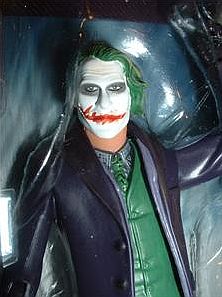 The new Joker action figure modeled after the late Heath Ledger has started arriving in stores and is reportedly flying off the shelves, as toy collectors scoop up as many of the snuff toys as they can get their hands on. After completing filming on The Dark Night, Ledger died in January from a prescription drug overdose.

As expected, the merchandise being released in his likeness has become a hot item. Eager consumers lined up outside Toys ‘R’ Us in Times Square yesterday morning and cleaned out the Joker inventory; one employee told the Post that “there are none left in the warehouse, either. You will be waiting a while if you want one.”

But that unnamed employee may not have been as informed about warehouse inventory as he claimed; a Mattel spokeswoman says many New York outlets will receive their shipments sometime this week. Jersey City gets their haul tomorrow, while a Toys “R” Us in Holbrook, LI still has some! And those who don’t mind a huge mark-up can find the item on eBay, where some can be purchased now for more than double the $9.99 retail price.