If a cyclist or pedestrian is hit by a car, the consequences for the driver all too often the same: He or she walks free, uncharged— even, in most cases, when the victim dies. It's a staggering shortcoming in the city's legal system, one that the NYPD has thus far made only the most perfunctory attempts to rectify. But a new set of ads from the DOT appeal not to drivers' possible entanglement with the law, but their consciences.

The new ads depict a triple whammy of despair, featuring images of family members at the crash sites, holding photos of the victims. Audrey Anderson, above, holds a photo of her 14-year-old-son, Andre, who was riding his bike along Shorefront Parkway in 2005 when he was struck and killed by the driver of an SUV. Below, David Shephard holds a picture of his fiancée, Sonya Powell, who was killed in the crosswalk at Baychester Avenue in 2009, just as the pair was winding down a day of Black Friday shopping. 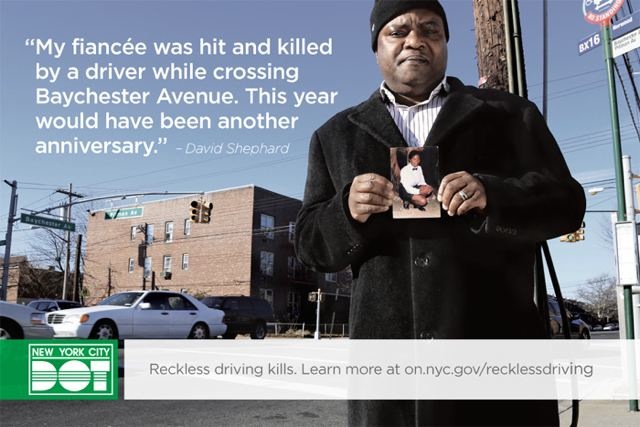 The ads are set to appear in bus shelters and bill boards in areas particularly plagued by reckless driving. (The site, nyc.gov/recklessdriving, has yet to be launched.) Earlier this month, DOT released a 212-page study analyzing in detail the number of crashes that occurred in the last year. Among other things, the study found 36 percent of crashes are caused by driver inattention.

#car crashes
#crash data
#cyclist vs. car
#dot
#nypd
#pedestrian vs car
Do you know the scoop? Comment below or Send us a Tip