Yesterday, Glenda and Damien Moore said good-bye to their sons, Brendan, 2, and Connor, 4, as they mourned the children in funeral services at a Brooklyn church. Damien Moore works for the Department of Sanitation, and the department's chaplin Peter Colapietro said, “Glenda, Damien, there are no words that we can offer. The only thing that we can offer is our support as a family. We pray for your strength in these days - we know that you will need it. But we also pray for your faith to know that.” 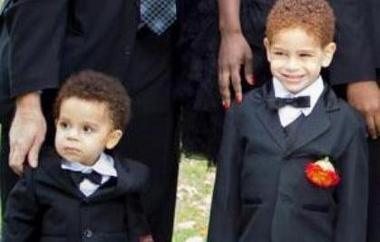 Brendan and Connor Moore, ages 2 and 4

On October 29, Glenda Moore was trying to escape Hurricane Sandy when her car stalled in Staten Island. (Her husband was working.) She took the boys out, carrying Brendan and holding Connor's hand, and attempted to find shelter. No one would let her into their homes and when the storm surge came, the boys were ripped from her arms. Their bodies were found three days later.

The boys were buried in the same coffin and members of the Department of Sanitation attended the funeral and acted as pallbearers. A neighbor of the family told the Daily News, "This should never have happened... They were the sweetest little things. This is the best family you could ever have met. This is the worst family that this could happen to. It's heartbreaking." Glenda Moore reportedly confronted a neighbor days after the storm, saying, "I asked you to help me, you bastard!"

Damien Moore is from County Donegal in Ireland, and the Consul General, Noel Kilkenny, attended the funeral. He told the Post, "These were two Irish children and American children. This is one of the more visible and heart wrenching signs of this tragedy."

#awful
#damien moore
#glenda moore
#hurricane sandy
#staten island
#tragedy
Do you know the scoop? Comment below or Send us a Tip
A new Gothamist is coming! We’ve moved comments over to our beta site. Click here to join the conversation and get a preview of our new website.