Health Dept.: HIV Testing for Every Adult in the Bronx 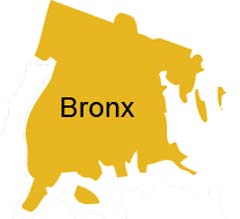 On the heels of announcing 40% of New Yorkers practice unsafe sex, the Department of Health wants to test every adult in the Bronx for HIV over the next three years. Noting the borough's highest AIDS-related death rate in the city, Health Commissioner Dr. Thomas Frieden said, "The Bronx has the opportunity to lead the city in the fight against HIV/AIDS by being the first borough to have all residents tested."

The health department hopes to make voluntary testing more available in hospitals and clinics, but the NY Times details how NY State law has been an obstacle: Essentially, the law has stayed the same since the 1980s and requires patients to "give written permission for testing after being counseled on the process, which many doctors found onerous and time-consuming." An oral consent process, many experts agree, would increase the number of people who would be willing to be tested.

Robert Bank, COO of the advocacy group Gay Men's Health Crisis, told the Times he hoped the program would expand to the rest of the boroughs, “Brooklyn is a horribly devastated borough. Manhattan is a highly impacted borough, Queens is a highly impacted borough.” (The highest incidents of HIV and AIDS is in Manhattan.) And in the past year, the Health Department has revealed cases of HIV among high schoolers are up nearly 30% and cases of HIV among young gay men are also rising. Here's information on where the city offers free HIV testing.