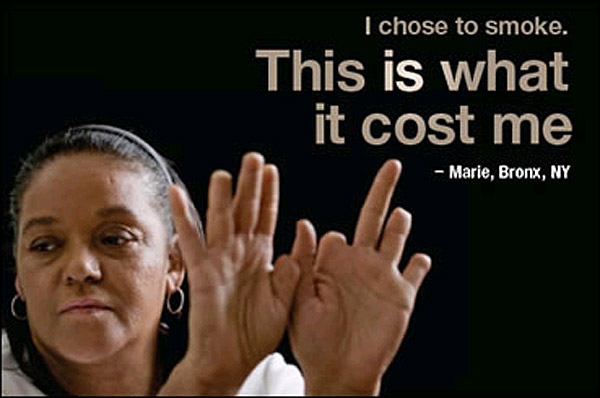 The Health Department launched its annual effort to get New Yorkers to stop smoking by rolling out another provocative ad. This one shows a woman whose smoking habit led to 20 amputations:

Like most smokers, Marie started smoking as a teenager. She developed Buerger’s disease, a condition that narrows arteries, reducing blood flow to the arms and legs. She has lost portions of most fingers, as well as a leg and a part of one foot. In the ads, Marie describes the pain she has endured and explains how her disability keeps her from doing even simple tasks. She also recounts how it affected her relationships with loved ones. “The light burned out in my kitchen and I can’t even change it,” she says. “My daughters might even have been embarrassed [by] what I was starting to look like. At one point, I wasn’t even living. I was just alive.”

You can see the TV spots here. Health Commissioner Dr. Thomas Frieden said, "Not only do cigarettes kill 8,000 New Yorkers a year, they disable and disfigure many times that number. Thousands of New Yorkers suffer strokes, heart attacks, and amputations that cause irreversible damage every year."

The Health Department is giving away free nicotine patches and gum through May 1--just call 311. Apparently Marie was able to quit after calling 311 for patches in 2006; she said, "If telling my story to the public helps one person quit smoking, it’s worth it." And the Health Department's has said its previous anti-smoking ad effort, using a smoker whose larynx was removed, has been successful.

#amputation
#anti-smoking
#heath department
#nicotine patch
#stop smoking
Do you know the scoop? Comment below or Send us a Tip