Heads Up: Cops Handing Out $270 Tickets To East Village Cyclists

Don't worry, the NYPD hasn't eased up on its controversial crackdown on cyclists. This morning another biker was slapped with a $270 ticket for running a red light in the East Village. Carly Triche, an advertising professional who was en route to work, tells us she's infuriated by the ticket, which was issued after she cautiously pedaled through a red light at the intersection of First Avenue and East 7th Street.

Triche, 29, insists she is a "good cyclist" who goes out of her way to "not be a douche." According to her account, she came to a full stop in the bike lane when she got to the red light. "There were no pedestrians in the intersection, and no drivers near the intersection," Triche tells us. "I treated it as a stop sign and signaled to turn left on 7th Street. I know it's illegal, but laws serve to protect people, and I wasn't putting anyone in danger."

After making the turn, Triche was pulled over on the next block of East 7th Street. "The cop car comes up behind me and I pull over so it can pass, because it's a narrow street. But the officer stopped behind me. She got out of her car and asked, 'Miss, are you aware of traffic laws in this city?' I said yes. And she said, 'You just ran a red light!' And she proceeded to write me a ticket. I've never even got a speeding ticket before."

The ticket (below) comes to $270, the same amount a motorist would get for running a red light. But Triche wonders "how many cars turned through a red light at that intersection because she wasn't stationed there to enforce the law? And how many cyclists got tickets today? It's an understatement to call it infuriating." She adds:

I'm very passionate about this subject, and the whole time I was trying to stay cool. The officer was very polite. But I told her, "I've been commuting to work for over two years by bicycle. And every day on my commute I have to fight for my life because of all the reckless drivers who run red lights and speed and don't pay attention." So I asked her, "Who protects us?" And she just ignored me. But after she drove off, I almost got hit by a car speeding down the street.

There are a lot of pedestrian and cyclist deaths every year, and what is the NYPD doing to protect us? I don't think ticketing a cyclist at an intersection with no cars and no pedestrians is doing anything to make the city safer. I find it backwards that I get a heavy ticket for endangering no one, yet three pedestrians were killed all within one day, and the most the NYPD can do is utter "no criminality suspected." People die do to driver negligence, yet I get a ticket.

Triche also points out that during her morning bike commute today, she "passed a few delivery guys riding the wrong way in the bike lane. Why not ticket them as they are actually endangering people?" She plans to fight the ticket, but at $270 you could argue that she got off easy—last year a Brooklyn cyclist shared his horror story about getting slapped with $1,555 in fines in a single traffic stop! 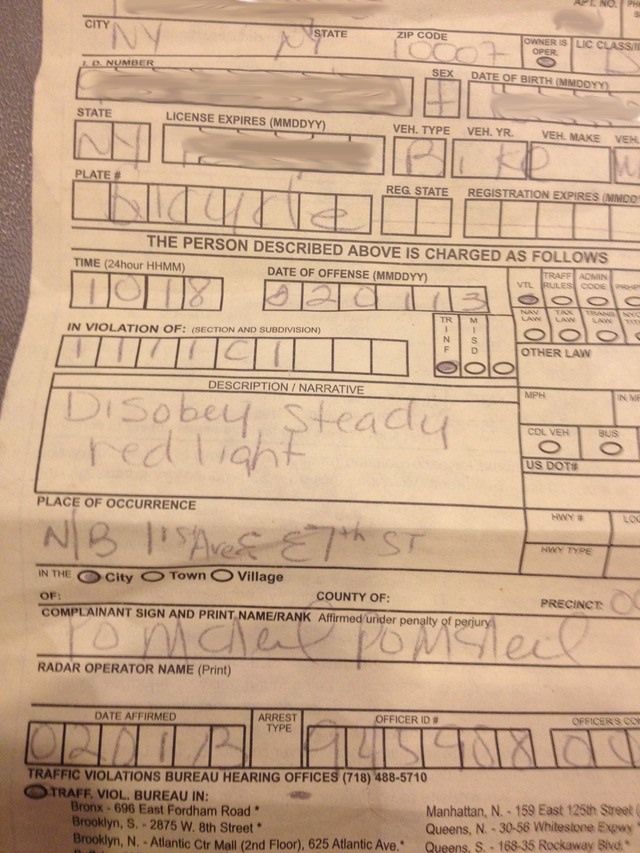 #bike lanes
#cyclist crackdown
#cyclists
#original
Do you know the scoop? Comment below or Send us a Tip