Headed for the Heat 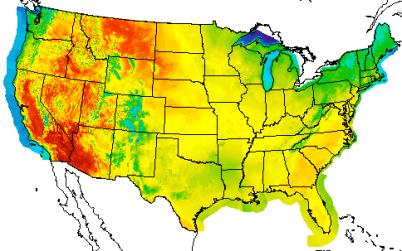 Here's a fascinating fact for impressing your friends this evening. At 8 p.m. the earth will be at its furthest distance from the sun for the year. The planet's revolution around the sun is slightly elliptical. Today we're about 94.5 million miles from the sun. Early next January we'll be only 91.5 million miles away (as demonstrated by this awesome graphic). The date of the aphelion has only a slight affect on seasonal temperatures, which are largely determined by the 23.5 degree tilt of the earth with respect to its orbital plane. The date of the aphelion changes slowly, it'll occur in the second week of July in 400 years, and in January in several thousand, and is one reason why the Ice Ages will appear again in 20,000 years or so.

No Ice Age this weekend! The last seven days have averaged 5.5 degrees cooler than normal. Today's temperatures will be about normal. There's a slight chance of an afternoon shower or thunderstorm today as a cold front passes through town. The front will bring drier, not cooler, air. Tomorrow's high will be in the upper-80s.

Saturday will be the nicest day of the weekend by far. The Bermuda High reasserts itself Sunday, bringing us a blast of hot and humid weather. High temperatures Sunday and Monday will be around 92-94. With the humidity that'll push us close to a Heat Advisory. Nowhere near the heat seen out west but still mighty unpleasant. The heat may break by Tuesday. Let's hope the floating pool is fixed before then!