He Knows What You've Injected 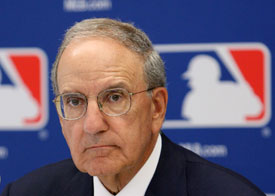 He’s made his list, he’s checked it twice and now we are going to find out who has been naughty and not nice. Former Senator George Mitchell's report on the use of performance-enhancing drugs in Major League Baseball comes out at 2pm today. And besides providing us with the most complete look at the use of performance-enhancing drugs to date, the Mitchell Report will also name names.

While it is just speculation at this point, one source tells the Bergen Record that “several prominent Yankees” will be named and that it is going to be “a rough day in the Bronx”. The source also says that none of the Mets on the current 40-man roster are named in the report. ESPN is reporting that Brian McNamee, Roger Clemens' personal trainer, supplied Clemens with steroids prior to and during his tenure with the Yankees. McNamee didn't stop with Clemens, according to the Daily News, Andy Pettitte will also be named in the Mitchell Report. And, it won’t just be Yankees or former Mets named, several “MVP’s and All-Stars will also be in it.

Whoever is named, expect a lot of backlash against the report later today. You can bet, that the Players Association will be jumping to the defense of the accused by pointing out that Mitchell is naming players who have never failed a drug test and are linked to illegal performance-enhancing drugs by receipts and witness testimony. Also, it is unclear what punishment, if any, will be handed out to the names on the list. So, it is very possible that most of the players named will show up in Spring Training eligible to play and punished only by the scorn of the fans.

File photo of George Mitchell from 2006 by AP/Mary Altaffer