The cable network HBO donated volunteer work and furniture to the renovation of a library in an East Flatbush homeless shelter that happens to be run by the troubled operator of the South Bronx apartment building shelter where two toddlers died earlier this month after being scalded by steam from a burst radiator. The city hosted a ribbon-cutting on Monday at Alice Branch Plaza, a shelter for families with children run by Bushwick Economic Development Corp., or BEDCO, marking the opening of a new library. A Department of Homeless Services spokeswoman said that HBO employees donated more than 150 hours of work and the company provided furniture for the new facility, which is part of the city's pilot program to promote literacy in family shelters.

"We are truly amazed by the renovation at Alice Branch Plaza," BEDCO head Frank Boswell said in a statement. "It will afford families an opportunity to better themselves in various ways. Not only do children now have a space to read and learn but young adults and parents will be able to search for jobs, educational resources, and apartments."

In a Wednesday announcement, the Department of Homeless Services said that the renovation is "just the first phase of a series of improvements" the city, BEDCO, and HBO would be carrying out at the facility, making it "the first time that a business organization has 'adopted a shelter.'"

HBO got involved through the city volunteer coordination agency NYC Service, according to the company, and some employees live in the neighborhood. In a statement, HBO spokesman Jeff Cusson focused on the positive.

"The cosmetic work done by HBO volunteers has made the Alice Branch Plaza homeless shelter a more welcoming place for struggling families," he said. "That was and continues to be our primary objective in adopting the shelter. It is especially rewarding knowing it will be felt during this holiday season." 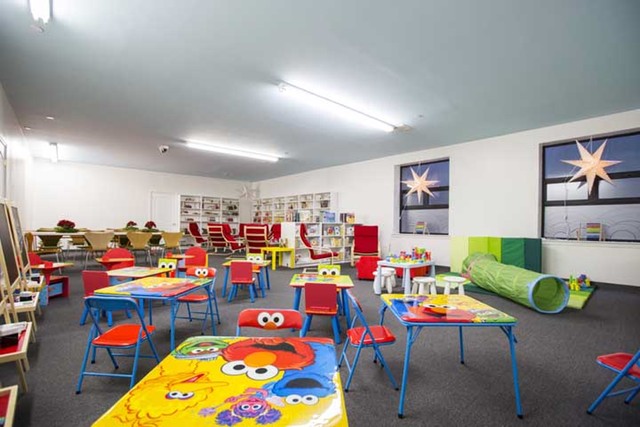 HBO and city officials likely rued the timing of the project's completion, less than two weeks after a faulty radiator fatally scalded Scylee Vayoh Ambrose, 1, and Ibanez Ambrose, 2 in their BEDCO-run cluster site shelter apartment in Hunts Point. The tragedy reportedly came a year after residents of the building complained to BEDCO about radiator problems and the group failed to address the issue or pass along the complaints to the city.

In follow-up reporting, DNAinfo disclosed that a previous business partner alleged in a lawsuit that after he withheld payment from BEDCO over a dispute, he received an anonymous call threatening to kill him. BEDCO was also the subject of two city investigations, was sued for failing to pay rent, and tried to hide its debts from the city, and was the subject of repeat warnings to DHS over two years that the agency failed to heed, according to the site.

"Not taking care of the dozens of HPD/Sanitation/Health violations is bad, but now you are playing with the LIVES of your residents," Kai Management property manager reportedly Weiss wrote in a May 2016 email to Boswell and a DHS administrator regarding elevator repair issues at a Bedford-Stuyvesant shelter. "Please do not disregard this email as you do with all others because this one you can get charged with manslaughter if something happens."

The Bronx apartment where the young girls died is a cluster site shelter, a type of converted private apartment that the city has found is the worst maintained, least monitored form of shelter, with the least adequate social services. The apartments have also been lucrative for landlords in low-rent areas seeking to convert apartments, often rent-stabilized, into shelter units for which the city often pays upwards of $2,500 a month. Mayor de Blasio announced in January that he would phase out the program, introduced by Giuliani and embraced by Bloomberg, over the next three years.

A 2015 Department of Investigation report found that there was no security, no onsite staff, and 149 open building violations at a BEDCO cluster site complex on East 174th Street in the Bronx.

The homeless population has grown over de Blasio's mayoralty despite his efforts to provide cash and legal assistance to people facing eviction, and restore rent voucher programs to get people out of shelters, making the transition away from dilapidated cluster sites slower than some in DHS would like, and forcing increased reliance on costly, ill-suited hotels for use as shelters.

"The Department of Homeless Services has been demanding corrective action from BEDCO and other cluster providers as the Department phases out this 16-year program," DHS spokesman David Neustadt said in a statement. "DHS is sheltering approximately 11,000 homeless New Yorkers in about 3,200 cluster shelter apartments after stopping the use of 450 cluster units so far this year. We are working to stop using clusters as quickly as we can, but that means opening more shelters across the city. We can’t stop using the cluster sites until we have alternatives."

Complicating matters are people like the Ambrose's parents who, as the New York Times reports, moved to New York City from out-of-state—in their case small-town Maine—and immediately applied for shelter here. According to the Times, 13 percent of current shelter residents' last known address was outside the city (all but 3 percent had previously lived here).

BEDCO runs all sorts of shelters located across the city, including shelter units in a boutique hotel in Bushwick, and is in the middle of two four-year contracts worth $28 million, according to city records. Some of BEDCO's cluster site shelters, including the East 174th Street shelter, have been run for years outside of the city's contracting system, meaning the city pays millions for them out of unaccountable slush funds and has less legal leverage than it otherwise would to ensure quality stewardship. As DOI noted in its 2015 report, the lack of contracts is a serious problem across DHS's shelters.

The East Flatbush shelter is a traditional homeless shelter, and is temporary home to about 68 families, according to DHS.

BEDCO did not respond to a voicemail seeking comment.