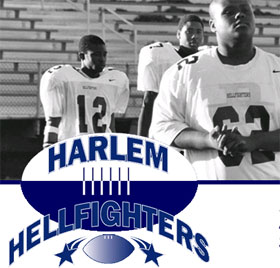 It was supposed to be an afternoon on the football field during a match-up between the Wadleigh Harlem Hellfighters and McKee/Staten Island Tech Seagulls. Unfortunately, it turned into a terrible day, as the Harlem team found the message "Y'all n-----s suck MSIT" written in black marker on their sideline bench.

The NYPD and Department of Education are investigating the incident. The Hellfighters' coach, former Seattle Seahawk Duke Ferguson, says that he felt "hostile environment" since the moment they arrived. Apparently the MSIT athletic director "demanded to see [Ferguson's] field pass" (which resulted in what the Post calls a "heated exchange") to bad calls made by the refs. Ultimately, Ferguson refused to let his players to shake the MSIT players after the game, which the Hellfighters won, 44-36.

The message was discovered during the first quarter, causing Ferguson to call the police immediately. The Advance reports the Public School Athletic League (PSAL) football commissioner isn't that thrilled with Ferguson's reactions. Alan Arbuse said that Ferguson called the police and newspapers - and didn't contact the PSAL - whereas MSIT's coach and athletic director did after the game. Ferguson thinks that the other adults are being too dismissive.

The MSIT Seagulls are made of two schools, one predominantly white (86%) and the other has a plurality of black students (39%, to 26% white). The Hellfighters, whose team is made up players from 13 schools, were the subject of a documentary, Hellfighters, that screened at this year's Tribeca Film Festival; see the trailer here.