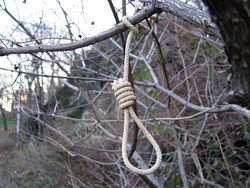 The person who hung a noose on the doorknob of a professor at Columbia's Teachers College the other week seems to have been a catalyst for NY metro idiots, who have been been copy-cating or otherwise emulating public displays of hateful symbols. Most recently, Parks Dept. employees were appalled to find 10" nooses wrapped around the necks of their clothes when they opened their work lockers in Queens Saturday morning.

Kenny Clark and Michelle Rouse-Williams are both supervisors at the Queens facility; Clark is party to a class-action lawsuit against the Parks and Recreation Dept. that claims minorities are passed over for promotion. When Rouse-Williams opened her locker and found the noose, her reaction was natural. "This has got to be a f------ joke."

In addition to the latest incident at the Parks Dept. station and Columbia, nooses have been found at a Brooklyn high school, around Long Island, and at a post office near Ground Zero. Lest hatemongers leave anyone out, swastikas have also been popping up around the city--in Brooklyn Heights, on a schoolbus, and on synagogues. The Daily News article has a bulleted time line of incidents over the past month involving swastikas and nooses in New York.