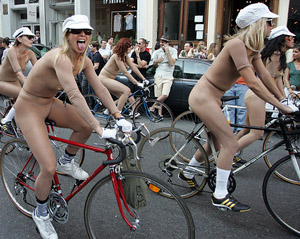 Leaders of South Williamsburg's Hasidic community are pressuring the city to paint over the newish bike lanes on Bedford and Wythe Avenues because they're appalled by the immodest attire of female cyclists pedaling through their neighborhood. Simon Weisser, a member of Community Board 1, tells the Post, "I have to admit, it's a major issue, women passing through here in that dress code. It bothers me, and it bothers a lot of people."

The DOT's addition of the bike lanes have been warmly welcomed by cyclists who brave the heavily trafficked corridor between Williamsburg and South Brooklyn. At a contentious community board meeting Monday, local Hasids tried (and failed) to stop a third proposed bike lane on Kent Avenue, a precursor to a Kent Avenue Greenway with a separate path for cyclists and pedestrians stretching from Newtown Creek to Sunset Park.

Weisser made no mention of the cyclists' dreaded sex appeal at the board meeting. According to the Brooklyn Paper, he told board members that he "has the whole community behind him. There is already a bike lane on Wythe Avenue — now they want a bike lane on Kent Avenue? You can’t accommodate every single street with a bike lane.” Milton Puryear, of the Brooklyn Greenway Initiative, argues that "the whole idea for the Greenway is to provide a benefit to the people of the community — not just bike riders — by making a truck route into a more inviting streetscape. If you look at Kent Avenue now, it’s just not a place you want to stroll, or ride a bike."

As if to prove his point, a bike rider was in an accident with a car service sedan on Kent Avenue the morning after the meeting, breaking an elbow and collarbone. No word yet on what the cyclist was wearing. [UPDATE: Cut-offs!]

#bike lane
#clothes
#dress
#hasid
#williamsburg
Do you know the scoop? Comment below or Send us a Tip