A Brooklyn man convicted in the vicious 2013 gang assault that left the victim blind in one eye could spend four years behind bars. 24-year-old Mayer Herskovic was sentenced in Brooklyn State Supreme Court on Thursday; his fate now rests on the outcome of an appeal.

Herskovic had faced up to 15 years in prison after DNA evidence linked him to a mob of men who chased and then beat Taj Patterson on Flushing Avenue in South Williamsburg. Patterson was 22 at the time, had been studying fashion marketing, and walking from a birthday party to his home in Fort Greene when he was attacked in South Williamsburg on December 1st, 2013. The assailants approached him from behind, knocked him down, and kicked him repeatedly while yelling "Stay down, faggot!"

During Herskovic's trial, Patterson testified that some of the men that attacked him had worn logos of the Shomrim, an ultra-Orthodox Jewish neighborhood patrol force that has been the target of both praise and scrutiny. According to the Times, the Shomrim members accused Patterson of vandalizing cars in the area during their attack, but a police investigation later debunked those claims.

Patterson suffered a broken eye socket, and, despite multiple surgeries, doctors say he will never regain sight in his right eye. 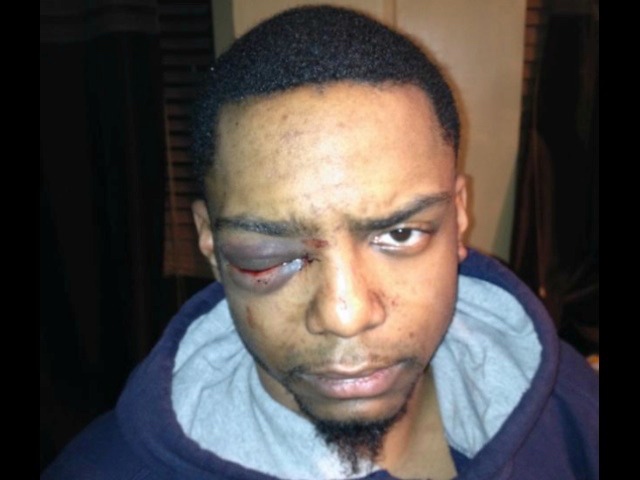 Two Shomrim members recently admitted to being involved in an attack on Taj Patterson, whose mother had to take his story to the media before the NYPD would fully investigate.

"I’m walking down some block by myself and then the next thing I know, I’m surrounded by a group of Hasidic Jewish men and they’re attacking me,” Patterson told the Daily News shortly after the attack. “I was alone. I was an easy target. I’m black. I’m gay, a whole slew of reasons."

The NYPD's initial investigation into the attack on Patterson was closed in a single day, with no arrests made. According to the Daily News, the initial police report only referred to one attacker and appeared to partially blame Patterson for his own attack, calling him "highly intoxicated, uncooperative and incoherent." The case was only reopened after Patterson's mother spoke out in numerous interviews with local media. The second investigation resulted in five arrests; charges against two men were dropped, while two others, Pinchas Braver and Abraham Winkler, took plea deals. Herskovic remains the only suspect facing jail time.

During Herskovic's trial last year, Hate Crimes Unit Detective Eric Sanchez testified that when investigators tried to retrieve surveillance footage of the assault, "We discovered that many of the residents in the area were being uncooperative." Sanchez said that when asked for footage, people in the predominantly Hasidic Jewish area claimed their cameras were broken or weren't set to record at the time.

In his sentencing yesterday, judge Danny Chun acknowledged that Herskovic was "not the most culpable" for Patterson's injuries. Still, evidence appeared to directly link him to the beating. Prosecutors argued that lab tests found Herskovic's DNA on one of Patterson's sneakers that had been tossed onto a nearby roof during the assault. However, Stuart Slotnick, Herskovic's attorney, refuted the veracity of the tests.

"We think the DNA evidence was completely and totally flawed," Slotnick said in court Thursday, according to DNAinfo. "He's innocent."

Before his sentencing—and the immediate move to appeal—Herskovic said, "I wish that I could take back what happened to Mr. Patterson...I pray that Mr. Patterson finds peace for what he has suffered and endured."

"I'm 24, my life is about family, helping people," he continued, according to the News. "I work as a construction worker. I work with all kinds of people, black, white, Hispanic, gay and not gay." An appellate judge issued a 120 day stay of Herskovic's sentencing while his attorneys prepare his appeal.

While Herskovic praised his own good character and his legal team continued to refute evidence, prosecutor Timothy Gough stressed that Patterson was the clear victim and had suffered permanent physical and psychological pain. Gough told the Times Patterson has lost his outgoing nature and now questions his belief in a higher power.

"He was a young black male in a predominantly Orthodox neighborhood," he told the paper. "This defendant, that group, that community could not see him as an individual."

#assault
#hate crime
#homophobia
#mayer herskovic
#shomrim
#taj patterson
Do you know the scoop? Comment below or Send us a Tip