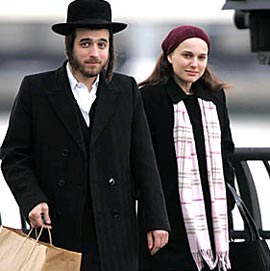 Not many people would leave a role as Natalie Portman's husband in a film, but Williamsburg resident Abe Karpen has to do just that. Karpen, who is a Hasidic Jew, told the Daily News, "It's not acceptable in my community. It's a lot of pressure I am getting. They [the rabbis] didn't like the idea of a Hasidic guy playing in Hollywood."

Portman and Karpen had been filming a short called "Kosher Vegetarian" for New York, I Love You, which will include 12 short films about love in the Big Apple. Karpen was asked to hold Portman's hand but refused, "It's against our religion. You can't even hold your wife's hand on the street."

A rabbi also told him his kids would be kicked out of their schools if he continued to film his role, so Karpen, a kitchen cabinet salesman, is kissing his silver screen dreams good-bye. He and his family left the city for the weekend (a friend said, "The community wants to kill him").

One Hasidic acitvist told the News, "We don't watch television. We don't go to the movies, so to be in a movie is the worst thing. It's a shame for any Hasid." This is probably why the Law & Order: SVU episode involving the Hasidic community had actors wearing, as Television Without Pity put it, "really junky-looking fake beards...it looks like they raided a ZZ Top cover band's tour bus."

#Abe Karpen
#hasidic jew
#Hasidic Jewish communnity
#I Love You New York
#movie
#natalie portman
#williamsburg
Do you know the scoop? Comment below or Send us a Tip