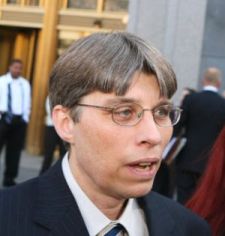 The 50-year-old librarian on the receiving end of a copyright infringement lawsuit brought by the Harry Potter author was driven to tears yesterday while testifying in a Manhattan courtroom. Steven Jan Vander Ark (pictured), a former Star Trek fan from Michigan whose exhaustive website The Harry Potter Lexicon would be published in a print version by RDR Books, told lawyers that he was devastated by the lashing he’s received from J.K. Rowling and "the Harry Potter community... This has been an important part of my life for the last nine years or so.”

According to Vander Ark, his website is visited by over 1 million Harry Potter fans per month, but he’s earned just $6,500 from advertising from 2000 to 2007. He currently resides in London, where he’s working on a book about Harry Potter locations and had planned to work as a guide giving Harry Potter themed tours in Europe. But Rowling’s lawsuit put that on hold.

Vander Ark’s frown did turn upside down at one point during his three hour testimony when an attorney said Rowling had criticized his Lexicon’s erroneous etymology for the door-opening charm "Alohomora;” Vander Ark had speculated that the word originated from "aloha" and the Latin word "mora." In fact, Rowling testified, Alohomora comes from a West African dialect. "Really!" Vander Ark exclaimed. "Sorry. That's very exciting stuff for someone like me."

Rowling, sitting just ten feet away from Vander Ark yesterday, was unmoved. In a statement released after the testimony, she said, “A fan’s affectionate enthusiasm should not obscure acts of plagiarism.” The trial is expected to keep geeking out into next week.