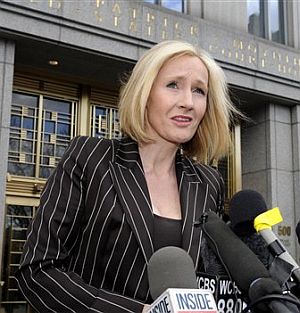 As the Harry Potter copyright infringement trial drew to a close yesterday, the judge urged the two parties to use their “imaginations” and agree to a settlement. Judge Robert Patterson professed a love of literature and invoked Charles Dickens’s Bleak House as cautionary tale, “A very sad story. Litigation isn’t always the best way to solve things."

But in their closing arguments, attorneys for both sides seemed far from a settlement. Rowling’s lawyers argue that the proposed publication of a Harry Potter Lexicon, which is largely drawn from a fan website praised by Rowling in the past, would not only hurt Rowling’s books sales but also Warner Brothers’ marketing of Harry Potter movies and merchandise. The wealthy author also said the book amounted to “the wholesale theft of 17 years of my hard work."

In Rowling’s final testimony yesterday, Judge Patterson asked her if she could imagine anyone “reading this lexicon for entertainment value?” “Honestly, your Honor, no,” Rowling replied. “But if I may say it without being arrogant or vain, I think there are funny things in there – and I wrote them.” She further said, "I didn't fly here [from Scotland] because I was worried about losing sales. I'm here because I passionately believe that this case is about authors' right to protect their creation. If this book is published, the floodgates will open."

And Rowling insisted the man behind the book and website, Steven Jan Vander Ark – who tearfully told the court Tuesday he felt cast out from "the Harry Potter community" – should be free to publish some sort of Harry Potter book: "I never ever once wanted to stop Mr. Vander Ark from doing his own guide – never ever. Do your book, but please, change it so it does not take as much of my work."”

Judge Patterson, who is deciding the case without a jury, is expected to give his decision in three weeks.

Photo of Rowling speaking to the press outside court Monday courtesy AP/Louis Lanzano.