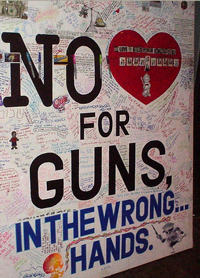 Things got a little gun crazy last night over a four-block area in Harlem. In the course of three hours, four separate gun battles with six shooters (participants, not pistols) erupted in uptown Manhattan and the police think they all may have been unrelated. WCBS reports that the night's violence kicked off at 10 p.m. with a double shooting at 125th St. and Lenox Ave. Before 11 p.m. two different men––17 and 23 years old––lay wounded on different blocks off Lenox Ave after they were shot in separate incidents. Then shortly before 1 a.m., there was a second double shooting, this time on 7th Ave. and 124th St. The cops picked up a suspect in that incident. Fortunately, all of last night's shooters are terrible marksmen and no one was killed; all the victims are hospitalized and in stable condition and no innocent bystanders were hit with stray bullets.

#crime
#gun
#guns
#harlem
#lenox ave.
#love
#manhattan
#photos
#police
#shooting
#The Police
#wcbs
Do you know the scoop? Comment below or Send us a Tip