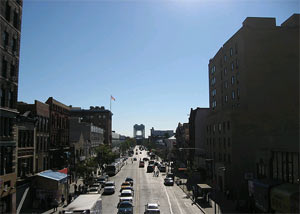 On Tuesday, a key City Council committee agreed on a rezoning plan for Harlem. The Zoning and Franchises Subcommitee voted 10 to 1 on a proposal that includes, the NY Times reports, limiting new building height to 19 stories (originally it was 29), creating a loan program for displaced small businesses, and $5.8 million to improve Marcus Garvey Park.

Additionally, 46% of new housing units will be "income-targeted," to provide more affordable housing--an amount that City Planning Commissioner Amanda Burden called "record-breaking." Council Member Inez Dickens, who represents Harlem, said she was satisfied with the compromise, "It is my opinion that all of the components I have worked so hard to secure will honor Harlem's past, claim Harlem's present, and provide for Harlem's bright expansive future." Dickens also mentioned Governor Paterson and Congressman Charles Rangel supported the revised plan.

Commenters at Uptown Flavor had mixed reactions to the plan. Some feel more business and development can help the community--plus the height restrictions help since there never were ones before--but there's skepticism about whether affordable housing isn't just a "trick pony" for developers. And one opponent worried to the Daily News that the plan means "there won't be any black residents in white, rich Harlem."