Harlem Residents Fight Clinic For Addicts: 'We Would Like Them To Go Away'

This summer, residents of Harlem’s Sugar Hill neighborhood took to the streets to protest plans to house a new methadone clinic in a $4.3 million brownstone on St. Nicholas Avenue. The neighbors quickly found support from local officials, and Argus Community, Inc., the company that bought the building, was ultimately denied a license. Now, just south of the failed clinic site, residents are organizing again to protest a proposal from Mount Sinai Health System for a new combined health care and education complex that includes drug treatment services.

Mount Sinai representatives have emphasized in community meetings that the treatment services at the medical complex will not include methadone, instead offering a range of outpatient primary and speciality care options. But that hasn’t won over neighbors who say the area—West 124th Street between Adam Clayton Powell and Lenox—is already over-saturated with drug treatment clinics, alongside people buying and selling drugs.

“This is a cross between The Walking Dead, The Wire, and Mardi Gras,” Harlem resident D.W., who lives near the proposed site, says of activity on his nearby block. (Because of what he said were possible threats to his safety, Gothamist agreed to use his initials only.) D.W. moved to the neighborhood in 2010 from Washington Heights, and says he and his home were almost immediately the targets of petty crime.

Currently, there are three facilities that offer medication-assisted treatment to opioid users, including methadone, on the stretch of West 124th Street that will house the Mount Sinai facility if it is approved. One of those three, a community health center called Harlem United, issued a letter of support in late September for the construction of the new health care complex. The organization’s CEO Jacquelyn Kilmer notes in the letter that the two providers offer different services, and that they will “strengthen and support each other.”

If plans go forward, the new health care complex will combine three existing outpatient clinics, two of which were recently unable to renew their leases, according to Mount Sinai representatives. The complex will offer primary and specialty care services for people with chronic medical conditions, including dental and pharmacy, and will focus on patients with HIV/AIDS and the LGBTQ community. In addition, one floor of the complex will be dedicated to a small school for kids with both mental health and substance use diagnoses through a partnership with the Department of Education.

For concerned neighbors, treatment services for mental illness and substance abuse disorders overshadow primary care or educational goals of the complex. Monica Barraza, who has lived in the neighborhood for 15 years, tells Gothamist that she encounters patients of the clinics on 124th every day, and says they loiter on the block and buy drugs.

“These patients are everywhere,” Barraza says. “Kids have to dodge them when they’re going to school. I’ve sort of become complacent, like ‘Oh, I’m stepping over someone.’”

Stepping over people who may be intoxicated is the kind of behavior that concerns Felecia Pullen, a lifelong Harlem resident who has experienced addiction herself and now runs a holistic substance abuse recovery center on St. Nicholas Avenue between West 124th and 125th, just west of the contested site. “When new residents are coming in and not integrating...not reaching out their hand to those they are stepping over to get their brownstones, that creates a lack of unity among Harlem residents,” she says. “I see people walking through the streets almost with blinders on, and that is so painful for me to watch. We all want to be seen.” 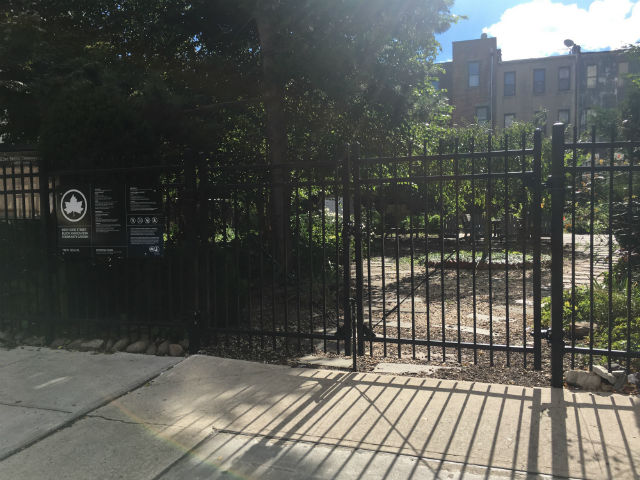 A community garden on 123rd that neighbors say is constantly padlocked because people were going there to shoot drugs. (Rebecca McCray / Gothamist)

Like cities across the country, New York City has seen a marked rise in overdose deaths in recent years. Though opioid use and overdoses are not new to Harlem, the neighborhood had higher rates of overdose deaths than many others in the city as of 2017, according to the New York City Health Department. Given the persistent opioid problem, Pullen says she is “all for as many services as we could possibly place” in Harlem to prevent more loss of life.

Though residents like D.W. and Barraza both say they understand and empathize with the current need for opioid treatment resources in the city, they remain concerned that adding another clinic to the mix will aggravate the crime and loitering they see on their blocks. D.W. tells Gothamist he has tried to directly ask the people who appear to be dealing drugs on his block to relocate, but was brushed off.

“It’s gotten to the point now where I don’t feel comfortable looking at anyone on my street,” he says. D.W. says he has also repeatedly turned to the NYPD’s 28th precinct for help, but while they are responsive, nothing has changed. (In a statement to Gothamist, NYPD Sergeant Jessica McRorie says the precinct’s commanding officer “works closely with community partners…as well as staff at existing social service locations throughout the precinct” and also regularly “meet[s] with local business owners and residents to address their concerns.”)

Fears of increasing crime around methadone clinics and other kinds of drug treatment facilities are common, but multiple studies show they are largely unfounded. One 2016 study in Baltimore found that violent crime was higher near liquor and corner stores than methadone clinics. Still, D.W. is frustrated that drug sales continue, and worries another clinic will make things worse.

“We’ve said to the police we don’t care for them to be arrested, we’re not looking for them to be thrown in jail,” he says. “What we really just would like them to do is go away.”

The project is still in the very early planning phase, and Mount Sinai representatives estimate that the earliest the complex would open, if approved, is 2020. The hospital is working with a developer to seek zoning variances from the Board of Standards and Appeals, designing the building, and continuing to talk to community members and local leaders.

#harlem
#methadone
#opioid epidemic
#opioids
#longform
#original
Do you know the scoop? Comment below or Send us a Tip