Harlem Rents Are 90 Damn Percent Higher Than In 2002

Median rent costs in Central Harlem increased by a vertiginous 90% between 2002 and 2014, according to a report analyzing newly-released census data. Meanwhile, in Bed-Stuy, the median cost of rent rose 63% over the same time period, prompting the neighborhood to change its infamous slogan to Bed-Stuy: Do Or Die Trying To Come Up With $2,000 Every Month Are You Kidding Me?

The new data was released last week by the U.S. Census Bureau, and is drawn from a survey of 18,000 New Yorkers, conducted by the New York City Department of Housing Preservation and Urban Development. And while the conclusion drawn by the report's author, the Community Service Society, isn't new (NYC rents are obscene—News at 11), it is shocking to consider just how astonishingly unaffordable parts of NYC have become—especially areas that were once considered to be a relatively affordable alternative to more high-priced neighborhoods.

The report focuses only on tenants who have recently moved, which CSS says "eliminates the tendency of lower rents paid by long-time tenants to smooth out market changes and mask the changes that affect tenants who are looking for a place to live." Check out the map accompanying the report; along with the unsurprising increases of over 50% for Williamsburg, Greenpoint, and south Brooklyn, we're also seeing sizable rent increases in parts of the Bronx, Inwood, and what appears to be Jamaica, Queens. 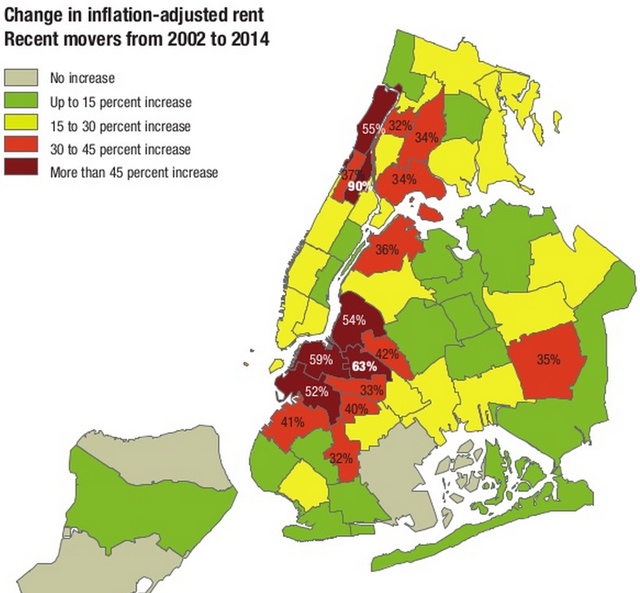 "Rent increases are outstripping incomes, leading to worsening rent burdens," the report concludes. "Rents in New York City continue to rise faster than incomes. For low-income households, the result is an ever-larger share of income being devoted to rent... The loss of rent-regulated housing to vacancy deregulation is combining with the loss of subsidized housing and with rising rents overall to dramatically shrink the city’s supply of housing affordable to low-income households."

The report was released as the legislature in Albany nears the end of its session next week, just as rent stabilization laws are set to expire. According to the report, NYC has lost nearly 440,000 units of housing which were affordable to very poor households with incomes below twice the federal poverty threshold. Much of the loss of affordable housing is the result of rent-stabilized units reverting to market rates once the rent reaches a high enough level ($2,500) for the landlord to take it out of the rent-stabilization program.

On the plus side, median rents dipped slightly in Canarsie, Bay Ridge, and the south side of Staten Island. And Buffalo is still the affordable sixth borough.

#gentrification
#harlem
#rent
#rent regulation
Do you know the scoop? Comment below or Send us a Tip