Two days after Christmas, Harlem resident John Tran found himself taking time off from work not to relax but instead to navigate the excruciatingly slow and red tape-burdened workings of New York City bureaucracy. On December 26th, he had been issued a civil summons for jumping the turnstile at the A,B,C,D subway station at 125th Street, not far from his apartment.

The incident was at first a case of he said-she said—Tran vigorously argued he had in fact swiped his monthly MetroCard, but police insisted they saw him leap over the turnstile. The ultimate arbiter proved to be modern technology: four hours after he started his appeal at the Transit Adjudication Bureau in downtown Brooklyn, the MTA’s computer system showed that on the day in question he had swiped his card at precisely 11:36 a.m., roughly two minutes before police officers said they saw him do otherwise. 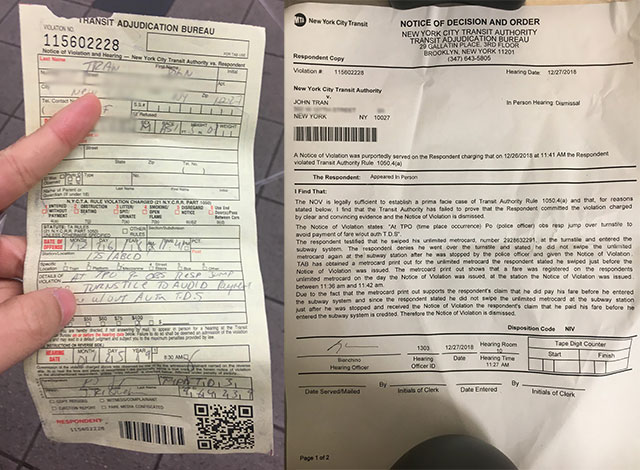 The mediator dismissed the case and the $100 penalty along with it.

By then, Tran, a 32-year-old who works on sustainability and diversity issues for Pernod Ricard, a French wine and spirits company, had grown incensed. While sitting in the bureau’s cavernous waiting room, he couldn’t help but notice that nearly all of the roughly 20 or so people he saw were minorities.

“This was a disproportionate representation of New York City in general,” he said.

On Tuesday, less than two weeks after his summons was thrown out, Tran filed a lawsuit against the city, the New York Police Department and the three police officers who falsely accused him of breaking the law. The complaint alleges that, through its efforts to crack down on fare beating, the city and the NYPD employed a “quota-driven and race-based policing” practice that violated his civil rights.

In an interview with Gothamist, Tran, who is Asian, said he also believes the way he was dressed that morning—wearing a beanie, puffy coat, along with sweatpants and sneakers—played a role in how he was treated by police.

As of late Wednesday, the city’s law department did not comment on the lawsuit except to say, “We will review the complaint.” The NYPD did not immediately respond to a request for comment.

The legal battle comes at a time when the city and the NYPD are facing renewed pressure from the MTA to stop fare beaters. In December, the MTA said that a spike in the number of people who do not pay to ride the subway and buses cost them $215 million last year. The amount is an increase of $110 million over 2015. While the MTA has an operating budget of $16.6 billion, it has projected a budget deficit of nearly $1 billion by 2020 and has blamed some of its financial struggles on fare beaters.

Both Mayor Bill de Blasio and transit officials have placed part of the blame on the decision by Manhattan District Attorney Cy Vance last year to no longer have his office prosecute most people arrested for fare evasion. In February 2018, De Blasio warned that Vance's decision would “open up the gates of the subway for free.” 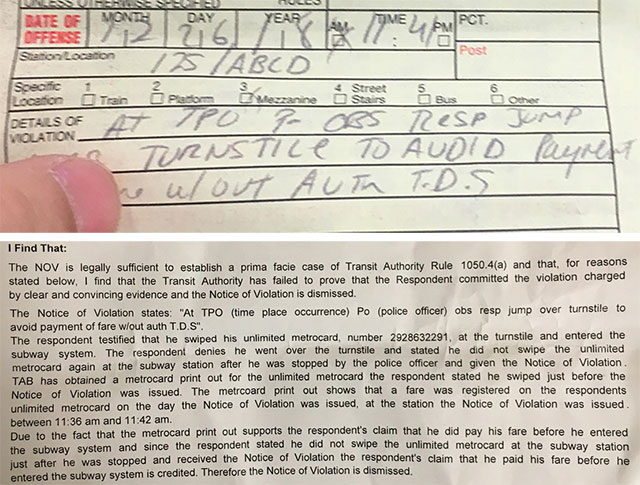 But on Thursday's Brian Lehrer Show, New York City Transit President Andy Byford said that while he viewed it as part of his job to collect revenue for the MTA, he recently had an "excellent meeting" with Vance. "[W]e both agreed that criminalizing people is not the answer," he said, praising the city's nascent Fair Fare programs, which offers discounted MetroCards to low-income New Yorkers.

Data on turnstile arrests supports the contention by criminal reform advocates that such “broken windows” policing policies disproportionately punishes minorities by a large margin. 89 percent of those arrested in NYC in 2018 for turnstile jumping were black or Hispanic, virtually the same proportion since 2014 and despite the fact that turnstile arrests have dropped significantly, according to data from New York Division of Criminal Justice Services.

Moreover, the city neighborhoods that had the most turnstile arrests per MetroCard swipe tended to be predominantly black or Hispanic, according to an analysis by the Marshall Project.

In December 2017, the City Council passed a legislation sponsored by Councilman Rory Lancman mandating the NYPD to release detailed breakdowns of both fare evasion summonses and arrests by race, age and gender for every subway station in the city. But according to Tran’s lawsuit, the information released to date by the NYPD is incomplete. Currently, the available data makes it difficult to determine patterns of racial profiling at every transit location. In September 2018, Lancman and the Community Service Society sued the NYPD for failure to comply with the fare evasion law, calling its limited release "a sham" that "makes a mockery of the law."

“They put up some some data to say, ‘here’s the data,’” said Kathleen Linnane, Tran’s attorney, who said she tried unsuccessfully to determine the number of turnstile summonses arrests at the 125th Street station in Harlem. “It doesn’t allow anybody to draw a public conclusion.”

In addition to compensatory damages, Tran is asking the NYPD to comply with the law by providing full statistics related to fare evasion. He also wants the NYPD to say that its policing of fare beaters is unconstitutional.

Linnane believes Tran's case could potentially have a huge impact on minority communities given how the cost of fighting such summonses is unfairly borne by them. “Think about people who cannot pay $100 or who can’t afford to take a day off from work,” she said.

Tran said one of the reasons he decided to hire a lawyer and file a lawsuit was that he realized that unlike him, most people who are unfairly stopped or arrested for fare evasion don’t have the resources to do so.

Tran's other goal is to start a broader conversation, and he has been sharing his story with elected officials as well as on Facebook and LinkedIn. He said the experience has been eye-opening—he said he now notices police interactions that he had in past he had overlooked. "I’ve seen people arguing with them. I’m starting to connect dots," he said.

#fare beating
#fare evasion
#lawsuit
#MTA
#nypd
#subway
#turnstile jumping
#original
Do you know the scoop? Comment below or Send us a Tip