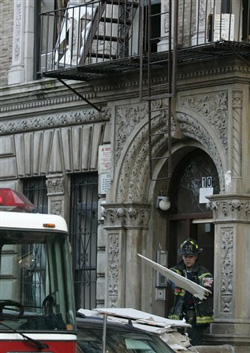 An illegal restaurant may have been the cause of a gas leak that caused a Manhattan apartment building to explode, injuring 20 people late yesterday afternoon. Fire Commissioner Nicholas Scoppetta said a gas leak caused a flash fire that blew out the walls of several apartments in the 20-unit building. Five people suffered serious burns and one firefighter was injured by falling debris while on the scene. Another firefighter was also hurt. Four of the burn victims were children. Investigators are uncertain of the source of the leak, but neighbors said one of the apartments housed an unlicensed takeout restaurant that served taxi drivers in the neighborhood.

According to WNBC, witnesses staggered out of the building and the buildings on either side covered in blood. Victor Albino, who works at a barber shop nearby, ran to the scene and kicked in the door of an apartment when he heard a woman screaming. He found severely burned children that he carried outside with a co-worker. A spokeswoman for the Buildings Department said that the explosion damaged a load-bearing wall, but no structures were in danger of collapse.

The explosion occurred at an address on West 119th St. in Manhattan, just off of 5th Ave. and south of Marcus Garvey Park. The explosion reportedly was heard blocks away and one commenter yesterday commended the FDNY and NYPD for arriving on the scene within a minute of the blast. The New York Post described the scene as "hellish" and describes two other men from the nearby Children's Aid Society who climbed through a blown-in window to find children badly burned and covered in rubble. Four children are in critical condition at Harlem Hospital. Neighbors have been allowed back into the adjoining buildings.