Harlem's ATLAH Worldwide Missionary Church seems to actively court controversy, with his anti-Obama and anti-gay stances broadcast to the neighborhood via the church sign. So it doesn't seem that surprising when the NYPD announced the church was vandalized over the weekend.

On Saturday, just after midnight, police say a suspect climbed over the locked church fence at 38 West 123rd Street. The suspect "removed letters from the church board and spray painted graffiti on the board." 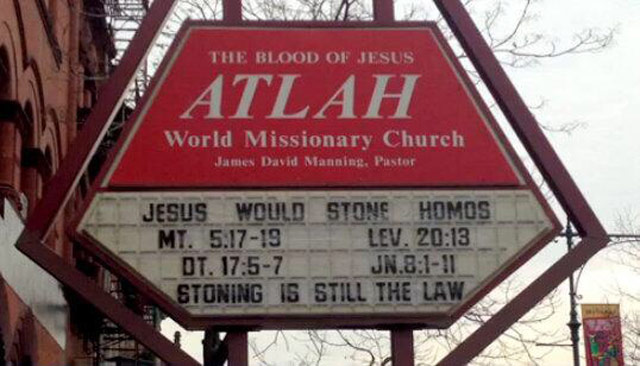 The recent message on the sign was, "Stoning of the homos is now in order. Stoning is still the law." We don't condone the destruction of property, but what do they (the New Radicals) say about getting back what you put out into this world?

Essayist and playwright Darryl Pinckney recently described Manning as "a guy straight out of a novel about uptown hustles."

The police are considering this an act of criminal mischief. Anyone with information in regard to this incident is asked to call Crime Stoppers at 1-800-577-TIPS (8477). The public can also submit their tips by logging onto the Crime Stoppers website at WWW.NYPDCRIMESTOPPERS.COM or by texting their tips to 274637 (CRIMES) then enter TIP577.

#anti gay
#ATLAH Worldwide Missionary Church
#criminal mischief
#harlem
#trolling
Do you know the scoop? Comment below or Send us a Tip