Hark! The City Is Planning To Install A Two-Way Bike Path Between The Brooklyn Bridge And Park Row

If you've ever tried biking from anywhere in the Financial District to the Brooklyn Bridge, you know that the route to the bridge's bike path is one of the most chaotic in the city, even before you get to the tourist-dodging hell of the bridge itself. And if you're like most cyclists, the only real option for that crucial last block between City Hall and the base of the path is threading the needle against traffic on Park Row where it merges with Centre Street, trying to make yourself small in the hint of vestigial zebra stripes running between police cars, TV news vans, and politico SUVs parked on your left, and maniacal cab drivers zooming past on your right.

Officially, I learned while reporting this, cyclists coming from the direction of Battery Park are supposed to cut west on Maiden Lane and north on Church Street to Warren Street when riding to the bridge, not that there is much indication of such a route along those perennially battered, clogged roads.

All that could soon change with a proposed lower Manhattan street redesign that would include a partially protected two-way bike path along the end of Centre Street and beginning of Park Row, a new crosswalk and other pedestrian safety modifications, and even—wait for it—added parking spaces.

The biggest shift would come from the conversion of the parking lane and zebra stripes on the north side of Park Row into a bike path separated from car traffic by a two-foot barrier. Sounds useful, right? 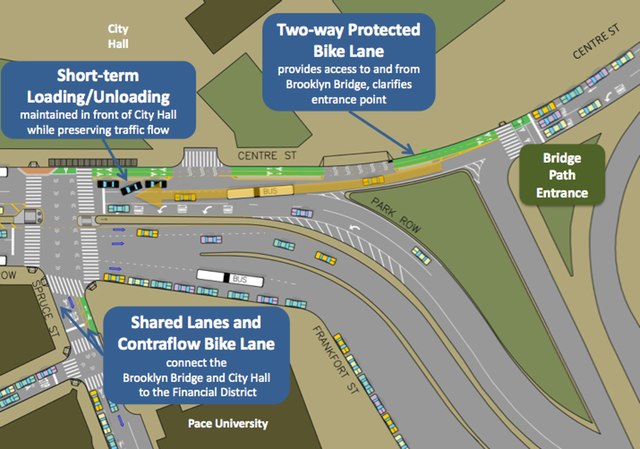 The proposed DOT design does a lot to protect cyclists and pedestrians, but scofflaw parking could pose a problem where there are gaps in the bike path barrier. (DOT)

Well, the gaps in the proposed barrier, at the front and side entrance to City Hall, raise the question of whether drivers already accustomed to ignoring parking regulations in that specific stretch of road will continue to do so in the new incarnation, blocking the new bike path. On paper, as the DOT explains in a presentation of the plan, there are only four designated parking spots, for credentialed members of the press, along the whole stretch of road in question. Yet, as the presentation notes, the adjacent No Standing zones and City Hall side-entrance curb cut are regularly occupied by police cars, an ice cream truck, and the vehicles of vendors with carts in the open space around the Brooklyn Bridge-City Hall subway station entrance.

The DOT plan calls for removing those four press parking spots, and in hopes of alleviating driver-cyclist conflicts, creating nine new parking spots for placard holders along the median between Spruce and Beekman streets, leaving two of three existing car lanes in that stretch. The plan would also turn the right-most lane of traffic on the City Hall side into a loading zone just beyond the City Hall entrance, narrowing the first post-bridge block of Park Row to one car through lane and one left-turn lane.

For pedestrians, who also have to put up with the mess over there, the design creates a crosswalk on the east side of Spruce Street, where people currently cross anyway, and bumps out curbs and medians further west to slow cars and reduce the amount of time it takes to cross.

An October 2015 DOT count found that 1,650 cyclists used this section of Park Row/Centre Street daily, of whom 28 percent were riding against traffic, and 9 percent on the sidewalk.

In this short stretch, in addition to Park Row meeting Centre Street, the route to and from the bridge path also crosses a Brooklyn Bridge entrance, a T intersection with Spruce Street, and a merger with Frankfort Street and another bridge entrance going the other way. NYPD data shows that this jumble of streets was the scene of 18 crashes in 2016, two of which injured four motor vehicle occupants each, another of which left another vehicle occupant injured, and a fourth of which injured a motorcyclist. Miraculously, none of the recorded crashes involved cyclists or pedestrians.

"We know there are a lot of cyclists coming from lower Manhattan," DOT Bicycle and Pedestrian Program director Sean Quinn told Streetsblog. "Almost half the cyclists are going the wrong way on Park Row or on the sidewalk. We knew we could capitalize on a route that people are already doing."

The proposal also includes the creation of a network of bike lanes and sharrows (those arrows in the middle of a car lane with a bike symbol) between Battery Park and City Hall. The bike lanes would be confined to isolated one- and two-block stretches between longer sharrow routes running through the warren of narrow downtown streets.

The DOT likes sharrows, so much that it includes them when counting its "more than 1,000 miles of bike route," but the jury is out on whether they do anything to improve road safety. A 2015 study of the efficacy of bike infrastructure in Chicago found that while the rate of cyclist injuries decreased citywide during the study period, it decreased least in areas with sharrows, less even than in areas where streets didn't change, as opposed to areas with bike lanes, which saw the biggest decrease in injury rates.

Add to this equation the bumper-to-bumper traffic and lack of loading areas on many of lower Manhattan's narrow, colonial-era streets, and it seems possible that much of the proposed markings could go unnoticed by drivers and cyclists if implemented.

The DOT spokeswoman did not address questions about whether the agency is researching or has evidence regarding the efficacy of sharrows, but said the new ones will "alert drivers and pedestrians to the possibility of cyclists on the road."

DOT reps presented the project to Manhattan's Community Board 1 on Monday. The agency told Streetsblog that the installation is planned for late spring or early summer.

The city also recently commissioned an engineering study to assess the feasibility of redesigning the Brooklyn Bridge bike and pedestrian path to reduce crowding. It is supposed to be completed sometime this year.

The full DOT presentation is below: