The tyranny of Time Warner Cable peaks once more: The cable provider is working on fixing a major broadband outage. The company's @TWC_Help Twitter said, "We're working to restore services to all areas as quickly as possible; no ETR. Tweets will be delayed while this is addressed."

According to Mashable, "The company's website is currently slow or unresponsive. The outage extends from the East to West Coasts of the U.S., with the most recent reports from Los Angeles, to New York, to Charlotte, North Carolina. The map below shows the major outage areas as of 7:25 a.m. ET:" 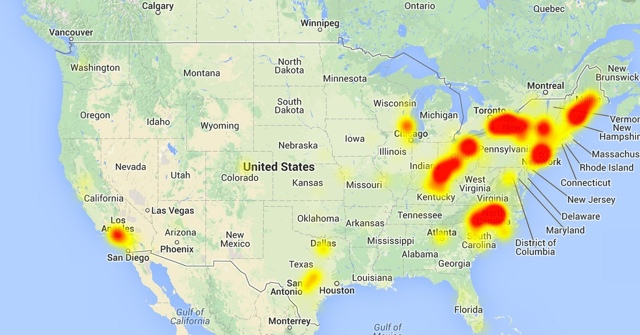 Time Warner Cable has about 12 million broadband customers across the company. As it happens, it was reported yesterday by Reuters, "Time Warner Cable Inc will pay $1.1 million to resolve a Federal Communications Commission investigation that last year found the cable and Internet provider did not properly report multiple network outages, the regulators said this week."

Yeah, that merger with Comcast is a GREAT DEAL.

Update: Gothamist readers confirm that there are outages in Washington Heights, Harlem, Tribeca, the Upper West Side, Williamsburg, Clinton Hill, Long Island City, Astoria and the East Village, but a few people in Brooklyn Heights/DUMBO and East Village say that they rebooted their routers with success. And Jake Dobkin says TWC service in Park Slope seems fine, "We are an exceptional neighborhood in all respects, though." Then he added, "It's probably like in the Sixth Sense where we’re all actually dead or something."

#broadband
#outage
#time warner cable
#Time Warner Cable suck
#why god
Do you know the scoop? Comment below or Send us a Tip