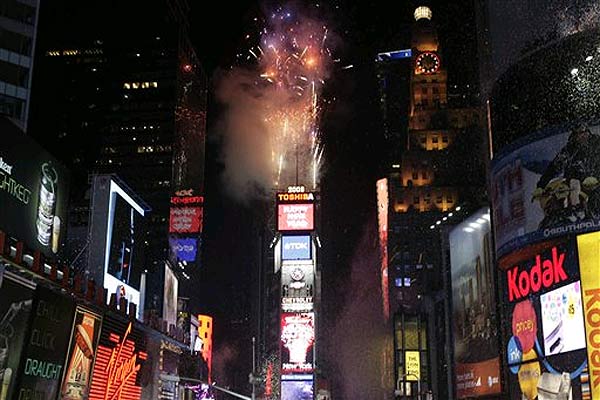 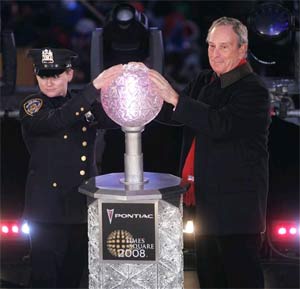 A sparkling new 700-pound ball, tons of confetti, and over a million people helped ring in the New Year from Times Square last night/early today. Mayor Bloomberg and police Police Academy valedictorian Karolina Wierzchowska, who also served in the Iraq War, hit the switch that brought the famous Times Square New Year's ball down. The Daily News called it a "shimmering pole dance," and it was the 100th time Times Square has had a ball drop to welcome the new year.

Mayor Bloomberg told NY1 his 2008 wish for the city, "I hope we can continue all the trends ... 2007 has been a great year for New York City. Let's just hope we can duplicate it in '08." And though there were a number of incidents over night, Times Square - with almost 1,000 rookie cops on patrol, street closures, and more NYPD procedures in place (like welding manhole covers) - did not seem to have any criminal incidents.

As is our tradition, we watched Dick Clark count down to 2008 on his Dick Clark's New Year's Rockin' Eve special. He seems to be doing better, but his body and faculties seem to tire quickly, when his still-spry mind was trying to express things. We hope he continues to feel better in the new year. Regarding some of the other New Year's hosts, Ryan Seacrest was smooth yet annoying, Carson Daly was more engaging if somewhat dull, and Tila Tequila (hosting on MTV) was as terrible as we thought she'd be.

With 2008 just minutes old, the Department of Sanitation began its extremely coordinated effort to clear up the 40 tons of confetti and trash quickly from the crossroads of the world. The DOS had over 100 workers, plus 16 mechancial sweepers, 13 collection trucks, 14 leaf blowers and a few low-tech brooms. On NBC's coverage, we saw Tiki Barber join the DOS to do a little sweeping and a lot of hand shaking.

We wish you a happy new year and hope you enjoy the first day of the new year, which might also be your final day of a long vacation. Tell us about your New Year. And if you took pictures of New Year's in Times Square or elswhere revelry, you can share them with us by tagging them "gothamist" on Flickr or sending them to photos(at)gothamist(dot)com.

Photographs from the Times Square festivities by Seth Wenig/AP