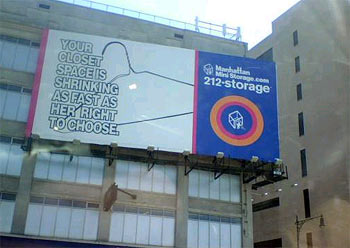 Aha! The Sun has some feedback from a number of organizations about the Manhattan Mini Storage billboard that proclaims "Your closet space is shrinking as fast as her right to choose" with a big hanger in the image. The ad, which on the storage company's West Side highway space, has been generating much controversy.

Naturally, the Catholic League for Religious and Ciivl Rights is outraged: William Donohue told the Sun it was "insulting and highly offensive." And Morality in Media's president wonders why Manhattan Mini Storage would repel potential customers with conservative values.

On the other side, Planned Parenthood of NYC says, "We think it's fabulous. We salute Manhattan Mini Storage for helping to make New Yorkers as aware as we are of the growing restrictions on reproductive freedom in this country." And a NARAL spokesperson says it's great for the company to wear "its pro-choice values on its sleeve — or on its building."

One marketing executive thinks it may too divisive, but an NYU professor thinks it does its job in getting people's attention. But what do you think?

Manhattan Mini Storage advertising has a history of tweaking Bush/Republican politics; for instance, the "Your closet's so narrow it makes Cheney look liberal" poster.