Twenty women in red cloaks and white bonnets walked silently into the State Capital in Albany on Monday, evoking Margaret Atwood's dystopian handmaids—women stripped of their rights and reduced to involuntary childbearing. The activists, from Planned Parenthood and the National Institute for Reproductive Health, hope to sway Republicans to expand abortion rights and secure broad access to copay-free contraceptives before the legislative session ends on Wednesday. They plan to line the hallway between the Senate conference room today and tomorrow, as well.

"The Handmaid's Tale makes it very clear that what allows for this really repressive future, and really oppressive future, is inaction," said Danielle Castaldi-Micca, an organizer with NIRH. "From our perspective, inaction is really unacceptable, here because [New York] is a place where we could be securing real proactive rights and access to contraception."

This week's actions in New York follow similar handmaid demonstrations in Texas, Ohio, and Missouri. According to Castaldi-Micca, the women got the attention of Senators on both sides of the abortion debate. "I think there was definitely a generational divide of like, 'Oh, sure, Handmaid's Tale,' and people who were like, 'Are you nuns? Are you a choir?" she said. "And definitely some people were like, 'This is super creepy.' Well, the idea of a time where women are used solely for breeding is very creepy."

While the Supreme Court ruling in Roe v. Wade enshrines a woman's right to an abortion after 24 weeks if the pregnancy threatens her health, New York's law is more strict: currently, it criminalizes late-term abortions unless the doctor believes beyond a doubt that the pregnant woman could die. As a result, advocates say, women facing health risks, or whose fetuses are at risk, are left without an in-state option. Those with means travel to a handful of states that offer the procedure, including Colorado and Kansas. 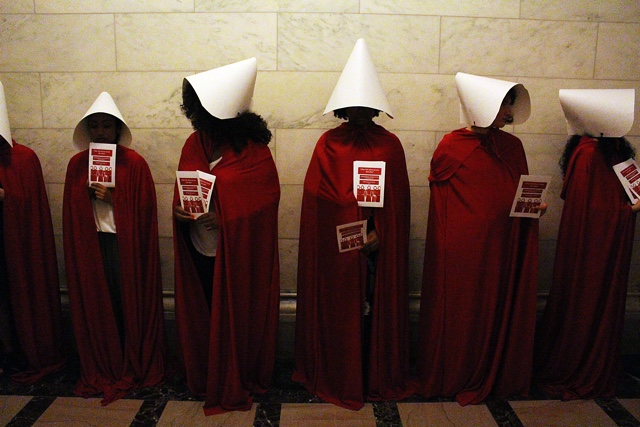 In January New York's Democratic-majority Assembly passed the Reproductive Health Act—legislation that would codify Roe v. Wade at the state level, protecting the right to abortion in New York in the face of conservative Supreme Court appointments.

It also passed the Comprehensive Contraception Coverage Act, which would require insurers in New York to provide copay-free coverage for all FDA-approved contraceptives. Emergency contraception like Plan B, which typically costs at least $50 without a prescription, would be covered over the counter—an expansion on the ACA. Male contraception would be covered, as well. Proponents say the law is a crucial protection for women as federal funding for Planned Parenthood continues to hang in the balance.

But both the RHA and CCCA are loitering in Senate committee on Tuesday, with less than two days left in the legislative session. And while the CCCA has Republican support—the primary sponsor is Republican Senator John Bonacic—the RHA has met resistance on both sides of the aisle. Senate Majority Leader John Flanagan did not immediately comment on the bill, but in the past Republicans have dismissed it as harmful to the mother.

There are also three New York City Democrats who have not signed on as co-sponsors to the RHA: Simcha Felder of Brooklyn; Ruben Diaz of the South Bronx; and Joseph Addabbo of Queens. A spokesman for Felder declined comment, saying that it is the senator's policy not to comment on legislation in committee. A spokeswoman for Diaz, who has long been a vocal opponent of abortion, said, "Senator Diaz's position on these issues is still unchanged." Addabbo's office did not immediately respond to a request for comment.

Governor Cuomo, who has endorsed the RHA and CCCA, proposed regulations in January that would require insurance companies in New York to continue offering birth control for no co-pay, even if the Affordable Care Act is repealed. But those regulations have yet to be finalized, and advocates say they're less comprehensive than the CCCA. They don't cover emergency contraception, for example, and would only cover one type of contraception in each category (IUD, pill, etc.).

The Governor's Office did not immediately comment on whether his office plans to make a final push for floor votes on the RHA and CCCA this week.

"We are hopeful that the leadership of the NYS Senate will see the light," said Castaldi-Micca of the NIRH. "We hope this rather dramatic message of The Handmaid's Tale will help them understand how serious the women of New York are about this, and how frightened they are about losing their rights under this new federal administration."

#Albany
#CCCA
#handmaid's tale
#Reproductive Health
#RHA
#original
Do you know the scoop? Comment below or Send us a Tip