Yesterday morning, one of the security guards at rapper 50 Cent's 48,000 square foot Farmington, CT mansion discovered an empty Mazda outside the gate, so he called the cops. And then another security guard discovered a guy hiding in the manse. According to the Courant, Alexander Hernandez, 19, "was found in a closet drinking a bottle of wine that he had stolen from the home," while Santos Padilla, 21,"was found in a separate closet, police said. Both men had marijuana in their possession, police said." Oh, and it's also believed they were drunk before entering the home. 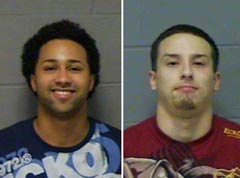 The two men were charged with burglary, criminal trespass and possession of marijuana, however the men didn't literally break in: There were no signs of forced entry and the pair allegedly scaled a fence and found an unlocked door. (Hernandez's sister told TMZ that they are simply huge fans and never wanted to steal anything.) Hernandez made $50,000 non-surety bail but was turned over to another Connecticut town's police because of his outstanding warrants, while Padilla remains in custody, with bail at $50,000.

50 Cent has been trying to sell his home for three years; its asking price has dropped from $18.5 million to $9,999,999. The Queens native, who bought it for $4.1 million before adding his own decorative flourishes ($80,000 chandelier; Gucci room; poles for pole dancers), once said of the estate, "I like the look of an Architectural Digest [style]...There's a lot of good living going on, and it ain't based (on) the actual money that's being spent, it's the choices that people make. You don't have to buy a $50 million home to build a lifestyle that's equivalent."

#50 cent
#alexander hernandez
#break in
#connecticut
#mansion
#santos padilla
Do you know the scoop? Comment below or Send us a Tip