Guy Citi Biking Across America Punched In The Face Outside Tulsa

Jeffrey Tanenhaus, a 35-year-old ex-corporate event planner from Scarsdale, says he got punched in the face on Tuesday while riding a Citi Bike outside of Tulsa, Oklahoma.

As of this week, Tanenhaus is about 1,800 miles into a cross-country bike tour he embarked on in August, after lifting a Citi Bike from a docking station in the East Village (he says he reached out to Citi Bike multiple times to explain himself, but a spokeswoman for the company denies this).

I got assaulted by an angry pickup driver who punched me in the face and knocked over my bike. On a back road with no traffic. Totally unprovoked. I'm in shock. A kind couple is taking me to the hospital. ➡What happened? The driver first yelled at me while I was standing by the roadside, cursing at how bikers think they own the road. He spun his tires, covering me in smoke, and sped off leaving a long tread. Minutes later he came back, cursed at me for still being they're saying that I should have left by now and got out and punched me, splitting my lip and knocked over the bike for good measure. ➡TRUCK: beat up dark blue 2 door pick up truck. The guy who helped me said it looked like an old Chevy Silverado. Possibly an early 90s model, the truck was really worn. ➡ DRIVER: male Caucasian, 40s, shaved head, wiry frame and tattoos up and down both arms. ❗UPDATE: Thank you all for your kind wishes. I gave the police my statement but did not get a plate number. Creek County police are keeping an eye out for the truck I described. I really have enjoyed my time in Oklahoma and met wonderful people here. Don't worry, I won't let this taint my opinion of OK!

A self-described "ordinary New Yorker with an extraordinary passion for traveling, writing and Citi Biking" Tanenhaus elaborated on his cheekily-named "Countri Bike" journey in a blog post this summer. After quitting his corporate job and letting the lease expire on his "studio apartment endowed with a 300-square-foot terrace," Tanenhaus took to Citi Bike:

Citi Bike was both my moving van and passport to this transient lifestyle: gym in TriBeCa, post office box in Chinatown, favorite cafe in Williamsburg, meetings in Times Square, storage unit near DUMBO, and a couch or bed somewhere in between. As long as a blue bike was somewhere near, I felt comfortable and in control. 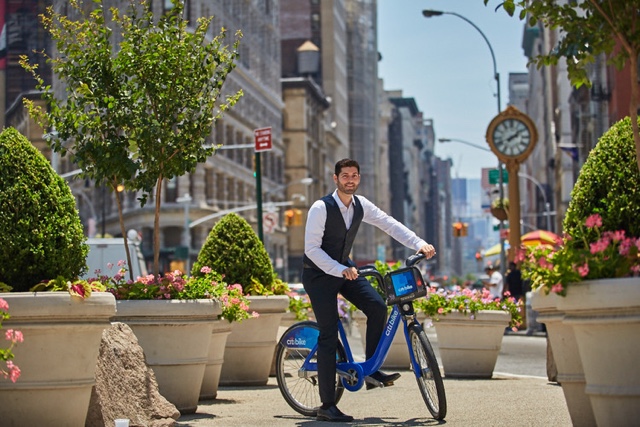 Tulsa World reports that Tenanhaus was standing with his bike on Old Route 66 near Sapulpa, Oklahoma around 1:00 p.m. on Tuesday, when 37-year-old Franklin Burton pulled over in his blue Chevrolet pickup.

"He pulled over to yell at me about how much he hated bikers and how we think we own the road and how we shouldn't be there," Tanenhaus, who emphasized that he wasn't even riding his bike at the time, told the paper.

“Get the f*#@ off the road, you f*#@in’ bikers think you own the road, I f*#@in’ hate you bikers,” spews a white guy with shaved head and tattoos up and down both arms. He reminds of Merle in the Walking Dead with his backwoods accent and cold eyes that flash with anger.

“I’m sorry, sir. I just stopped on the side of this quiet road, I’m not trying to be in the way,” I say to diffuse the situation.

He’s not listening. Reason is useless. Anger is seething into a rage. He’s almost foaming at the mouth. He barks more things that I can’t remember because I’m already in shock. And I am alone.

He squeals his tires, engulfing me in acrid smoke. He tattoos the road with a jet black tire trail and speeds off.

Tanenhaus said that Burton screeched away, only to pull up beside him again a few minutes later. On the second go-around, Burton allegedly got out of his car, punched Tanenhaus in the face, and pushed his Citi Bike to the ground before driving away. Tanenhuas filed a report with the local sherif's office. The course of events, as reported by the World, only got stranger as the day wore on:

Just after 8 p.m. Tuesday, Creek County deputies responded to an assault call at a residence in the same area. A woman told deputies that Burton had kicked in the door and hit a man in the house with a baseball bat, and that he also hit her, according to a news release from Sgt. Les Vaughan.

When the woman told Burton she was calling the police, he left and returned with an ax, Vaughan said.

A neighbor went to the home to stop the fight, and Burton pointed a handgun at him, Vaughan alleged. Burton eventually left in a black pickup.

GOT HIM! 🚔 A Creek County detective met me in Tulsa and I positively identified my attacker out of 16 mug shots. He's in jail now because he tried to kill his two friends last night with a baseball bat, double-sided axe and handgun. Classy guy. I'll take a fist over those other weapons any day 👊💥 Glad he's off the street for good 👍 #Tulsa #sapulpa #crime #justice #detective #police #grateful

Burton was reportedly apprehended and taken to Creek County Jail on Wednesday, while our hero recovered at Oktoberfest Tulsa.

For those primarily worried about Tanenhaus's Citi Bike fees: The maximum overage fee for an extended Citi Bike ride, which Tanenhaus says he's been charged, is $1,200.

#assault
#citi bike
#Countri Bike
#face punch
#Jeffrey Tanenhaus
#Tulsa
Do you know the scoop? Comment below or Send us a Tip