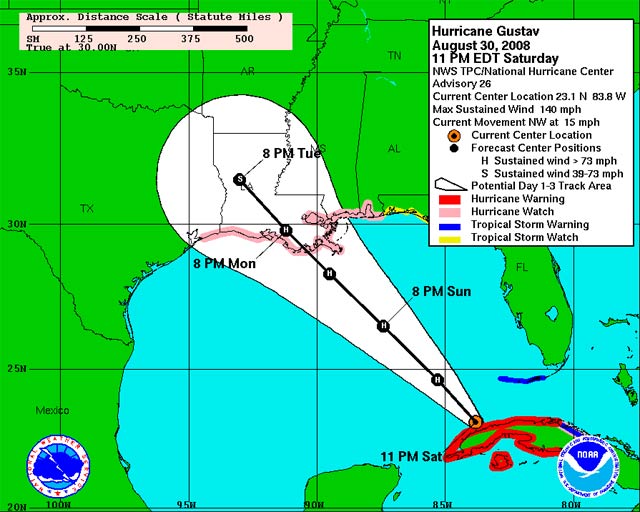 New Orleans Mayor Ray Nagin ordered the mandatory evacuation of the city for Sunday morning--the West Bank by 8.a.m. and the East Bank by noon. According to The Times-Picayune, Nagin called Gustav "the mother of all storms...We want 100 percent evacuation. It has the potential to impact every area of this metropolitan... This is worse than a Betsy, worse that a Katrina... You need to be scared and you need to get your butts out of New Orleans right now."

The NY Times reports that Nagin "may have been trying to shock jaded residents into taking prudent steps," since his "warnings were considerably more dramatic than the forecasts issued by the National Hurricane Center." Many residents were heeding his advice by driving out of town or heading to buses, leaving their houses boarded up. FEMA had asked ambulance companies to send crews to the Gulf Coast; ambulances from NYC headed towards New Orleans on Friday.

Cat 4 Gustav hit western Cuba earlier tonight; it's weakening, but is expected to gain strength in the Gulf of Mexico. Gustav will hit Louisiana and the Gulf Coast on Monday night or early Tuesday as a Cat 3 or 4 (Katrina was a Cat 3 when it hit Louisiana in 2005). Louisiana Governor Bobby Jindal said, "This storm could be as bad as it gets. We could see flooding even worse than we saw in Hurricane Katrina."