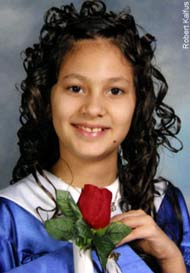 Destiny Rosario, who had attended a New Year's party with her family, had been walking home with relatives after their van broke down. Livery cab drivers had refused to take the whole family (a total of seven people), so they were walking the 20 blocks left to their home in East Tremont. When they passed a nightclub on Third Avenue and East 166th Street, they walked into a crowd where one person fired a gun.

Her uncle Edwin Cotto Sr. said, "We were walking by the club at the wrong time. We just started running. At one point, she grabbed her head and said, 'I can't hear anything.' That's when we realized what happened." The family still had trouble flagging down a cab, so they had to jump in front of one in order to stop one and took her to the hospital.

Buckshot was removed from Destiny's scalp (22 stitches) and the hospital said she is expected to make a full recovery.