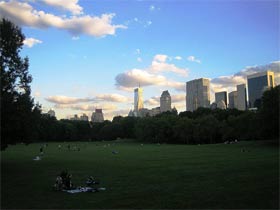 Two men walking along the East 79th transverse near Fifth Avenue were robbed at gunpoint by four men around 7:15PM on Wednesday night. The victims, ages 34 and 38, gave up their wallets and a cellphone for the robbers, who are described as young "black males between 18 and 20" years old" who "fled in the direction of the Great Lawn."

The 34-year-old victim spoke to the Daily News and explained he and his partner were headed to the Upper West Side to see the Macy's Thanksgiving Day Parade balloon inflation. He said the robbers "cocked the gun and pushed it at my head."

"They loaded the weapon; that's how they got our attention," he said. "One of them said, 'I want everything: your phone, your wallet, your money.'"

..."They were really calm," he said. "It appears they are making credit card charges in Scarsdale."

He described the assailants as "clean-cut kids in their late teens" who appeared "middle income ... not thugs."

The victim noted that the robbers didn't get his iPhone, which was "tucked away," and says he's lucky he and his partner were not injured in the robbery.

Robberies are up almost 40% in Central Park. The park has its own police precinct (which is undergoing renovations) that covers all 840 acres. You can see the most recent crime statistics here (PDF).