Guardians Arrested in Death of Three-Year-Old 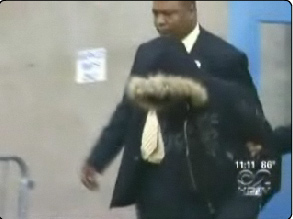 Neighbors shouted and cursed Lemar Martin and Nymeen Cheatham as they were led from their apartment building in Bed-Stuy, Brooklyn. Despite the sweltering heat, Cheatham wore a heavy parka, so she could pull the fur-trimmed hood over her head to hide her face. The pair were arrested in connection to the death of three-year-old Kyle Smith, who was declared dead Friday afternoon despite the best efforts of EMS workers. Cheatham was the young boy's godmother, who was ambiguously granted custody of him about a year ago due to his mother's crack addiction (Cheatham showed for the court hearing, but left before the actual proceedings could take place).

Kyle Smith was beaten to death. Police have told people that it appears that he was anally sodomized with a wooden stick; he had a broken leg, a broken pelvis, and cigarette burns all over his back. The medical examiner ruled his death a homicide once it became clear that he'd been beaten to death.

Although Kyle only lived with 30-year-old Cheatham and her 25-year-old fiancé Martin for a a year, police had visited her home three times in calls related to the boy's custodial state; no arrests were ever made. The Administration for Children's Services said that it was never involved with Smith or his living situation because he was never in the foster care system and no formal charges of child abuse were ever filed.

The building's superintendent, Gail McNally, told the Daily News that while Smith appeared to be a happy child, Cheatham was "arrogant and obnoxious" with a tendency to "go ballistic at times. She was always yapping." McNally also told the News that Kyle's father had petitioned for custody when he was taken from his crack-addict mom, but a court decided to give the boy to Cheatham.

#arrest
#bed stuy
#brooklyn
#cheatham
#child abuse
#HOMICIDE
#Kyle Smith
Do you know the scoop? Comment below or Send us a Tip