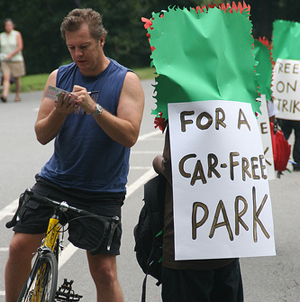 Since Mayor Bloomberg and the DOT have been showing an interest in making the city's streets more inviting to pedestrians and cyclists, advocacy group Transportation Alternatives has decided it's a perfect time to increase pressure on City Hall to make Brooklyn's Prospect Park completely car-free. As it stands now, the hours when drivers are permitted in the park have been whittled down to two hours in the morning and two hours at night on weekdays, during rush hour.

Those hours, however, happen to coincide with the times when most residents can take advantage of the park to exercise before and after work. Wiley Norvell at Transportation Alternatives tells the Sun that his organization is pushing for a three-month, car-free summer in 2009, which he said would give the city the time to study the effects of the street closures on traffic patterns and park usage. "We think it's time. Now it's to the point where the cars are in the park for so few hours that we can't do too much more than go car-free and see what happens," Norvell said.

The group plans to deliver about 7,000 postcards to Bloomberg signed by park users in support of a car-free summer next year. The cards were collected by teens who worked with Transportation Alternatives tracking the speed of cars using the park this summer and found that more than 90% exceeded the speed limit, often by more than 20 miles an hour. And last year a disgruntled park user put together a funny video showing car after car swerving around barricades and entering the park after 7 p.m., when it's supposed to be closed to traffic.