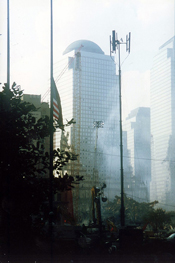 Politicians and labor leaders held a rally at Ground Zero Saturday pledging to support efforts to get federal funding for first responders, construction workers, volunteers, residents, and students exposed to health risks during and after the 9/11 attacks. On the sixth anniversary of that day, three New York Congressman––Democrats Carolyn Maloney and Jerrold Nadler, and Republican Vito Fossella––will introduce the 9/11 Health and Compensation Act. The bill would provide healthcare and monitoring to all the people exposed to the environment of downtown Manhattan after the attacks. It will also require the federal government to fund data collection so that the after-effects of exposure to the downtown Manhattan environment six years ago is better understood.

Sen. Hillary Clinton was at the rally, drawing cheers from the crowd and posing for pictures with labor leaders. The New York Times notes that the Senator attended the rally as a time-out from her Presidential campaign, but they quote her sounding like she's delivering a stump speech.

“And I pledged to myself, and I pledge to all of you, that I will stay with you every step of the way until we get every single person the health care they deserve,” she said. Doing that, she added, “will be my highest priority, whether I am your senator or I am your president.”

Sen. Clinton invited Ceasar Borja, the son of a NYPD officer, to sit with her at this year's State of the Union Address while his father was on his deathbed, to bring attention to the plight of ailing first responders. It was later revealed that Borjas' father had spent little if any time near what was then known as The Pile. Both Clinton and Rudy Giuliani will be back at Ground Zero Tuesday for the anniversary memorial services. Clinton will not be speaking at that event, but Giuliani will read a number of names of those who were killed.

The Democratic mayor appeared on WNYC’s "Morning Edition" a day after delivering his second State of the City address.

The Democratic mayor appeared on WNYC’s "Morning Edition" a day after delivering his second State of the City address.