Ground Zero Delays May Be Criminal 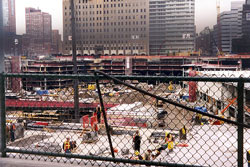 The former executive director of the Port Authority of New York and New Jersey, George Marlin, is urging federal investigators to look into WTC rebuilding delays, since seven years after the WTC attacks, Ground Zero is mostly still a giant hole. Marlin is recommending that the feds look into the delays as beyond a matter of bureaucratic wrangling and incompetence, but an issue of criminal wrongdoing that could include waste, fraud, abuse, and the the misleading of investors.

A source familiar with the $15 billion bond issuance dedicated to the redevelopment of the WTC told the NY Sun that the ideas of criminality at the Port Authority were far-fetched. "What would be the benefit for them? They really tried to hit these deadlines, so we are talking more about ineptitude."

As Mayor Bloomberg left a closed-door meeting with Gov. David Paterson where they discussed delays in the reconstruction of the World Trade Center, Bloomberg said that the delays were "very worrisome for everybody." Last week, the Port Authority ditched its scheduled time table for rebuilding the site and and proclaimed that there was no set date anytime in the future that the public could expect to see the Freedom Tower erected. It simultaneously confirmed billions of dollars in cost overruns associated with the project.