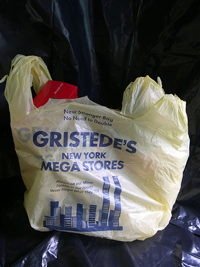 John Catsimatidis is hoping to follow in Mayor Bloomberg's footsteps by becoming a Democrat who follows the path of least resistance into Gracie Mansion. The owner of the Gristedes supermarket chain has millions of dollars to burn and would like to become the Mayor of New York City. Even for a lifelong Democrat like Catsimatidis, the easiest road to City Hall is to bypass the scrum of party politics and simply get oneself elected as a Republican in a heavily Democratic city. Green apparently beats both red and blue in the media center of the world, and it's possible for enough cash to overcome many obstacles.

Mayor Bloomberg's office cost about $100 a vote in his bid to be elected Mayor. He spent $73 million and $85 million to be elected and re-elected, respectively. John Catsimitadis says that he is willing to outspend Mayor Mike during his campaign if necessary. Good luck to Democratic opponents looking to raise that type of money, no matter how many rubber chicken dinners they host.

Catsimitadis has not formally announced his intent to run for office, but did switch from a registered Democrat who donated a lot of money to the Clintons, to the Republican party. With a never ending stream of multi-millionaire, or -billionaire, Democratic candidates at the ready to run for Mayor as Republicans, we're not sure which party should be more happy, angry, or confused.

The number of Gristedes supermarkets in the city have been decreasing over the last decade, but Catsimatadis' wealth has grown as real estate and oil prices have soared.