Grinch Strikes Early with the Heist of a FedEx Truck 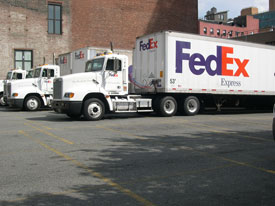 Well, this is a curious problem for FedEx's tracking system. How do you track your valuable packages when the truck carrying them has been stolen!?! A FedEx express truck was stopped on Manhattan's west side this morning by gun-wielding carjackers, who made off with the 18-wheeler. The driver was forced into a car and found in Brooklyn at around 1:30 a.m. A FedEx spokesman said the driver, who is not a suspect, was uninjured.

The truck was on its way to a FedEx facility in Newark when it was stopped by the carjackers at 47th St. and 11th Ave. While the spokesperson said the contents and value of the truck are unknown, WCBS is saying that the truck was carrying more than $2 million in cargo, including holiday gifts.

If they don't find that truck and its contents soon, there may be lots of angry people on Christmas. Not to mention all the businesses who shipped express documents yesterday.

Update: The stolen truck was found in Greenpoint in the deserted area of India Street and West Street, but it's unknown whether or not anything is missing at this point.

#brooklyn
#christmas
#heist
#india
#manhattan
#wcbs
#west side
#West Street
Do you know the scoop? Comment below or Send us a Tip