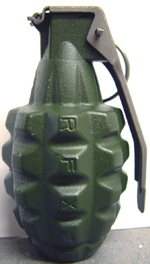 Two explosive devices detonated outside the Mexican Consulate at 39th St. near Madison Ave. in Manhattan early this morning, breaking several windows but not injuring anyone. The devices were believed to be replica hand grenades of the sort that are normally sold as novelties, but in this instance were packed with gunpowder. The explosions occurred around 3:30 a.m. and a resident on the block called the police reporting them. It wasn't until employees at the consulate arrived for work this morning, however, and found the windows of their building shattered that the damage was connected with the earlier report of an explosion. At that point, the bomb squad and the FBI were called in to investigate.

Authorities now say that the two devices were thrown towards the consulate by an individual on a bicycle, after witnesses described seeing someone ride by on a bike at the time. If the explosives were replica grenades filled with gunpowder, the incident would be very similar to an attack on the British Consulate in May 2005, when two identical devices exploded as Britons were going to the polls across the Atlantic. WCBS TV is saying, however, that while initial reports suggested that it was replica grenades this morning, it may have been some other type of device that exploded.