The same film crews that once threatened the existence of a Greenwich Village senior center may end up saving it.

Our Lady of Pompeii Church serves dual purposes—not only is it the site of the Greenwich House Senior Center, it's also a popular location for film shoots—so popular, in fact, that church pastor Father Walter Tonelotto opted not to renew the senior center's lease when it ends in 2015, preferring instead to convert it into a full-fledged movie set.

Unfortunately for Tonelotto, it seems that won't be the case. In a letter to the Villager, Community Board 3 member and treasurer of the New York Production Alliance Anne K. Johnson wrote that in the event that the center is ousted, production companies would surely boycott:

I have been assured by a top union official in the industry that if it became known that the senior group was being evicted from Our Lady of Pompeii ostensibly for the benefit of “film crews,” the space would be boycotted, and no film crew would rent the space.

The center has been in the basement of 25 Carmine Street since 1973, and provides seniors more than 2,000 meals per month, in addition to health services like flu shots and daily recreational activities.

Part of the center is already rented out to film crews, and many seniors don't understand why the current shared arrangement couldn’t continue. Center Director Sandy Gabin said though the shoots are sometimes a nuisance, Greenwich House has always worked to be accommodating. 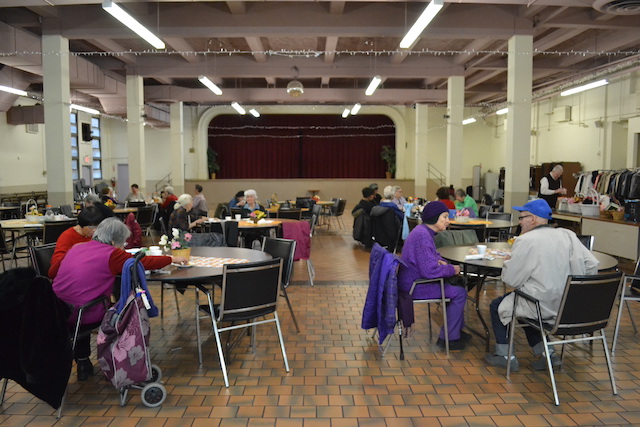 “They use the front… we do our activities in the back. Because this way [the church] can make extra money, which is fine," she said, noting the extra revenue helped to offset the cost of rent.

Gabin said the op-ed was a major boost to Greenwich House’s cause. “I thought it was wonderful," she said. "That came right out of left field, we weren’t expecting that."

Despite the extra support, the center still faces a battle to stay at Our Lady of Pompeii, and Gabin is forwarding a petition and letter to the church and Cardinal Timothy Dolan this week. With winter rolling in fast, the petition notes that the center is not only a useful social hub for seniors, but a warm place to go when temperatures drop.

One of the center’s volunteers, 94-year-old Josephine De Cicco, has been a regular at the center for over 30 years. At Tuesday’s lunch session, she was cutting and serving a cake to celebrate all the center’s November birthdays. 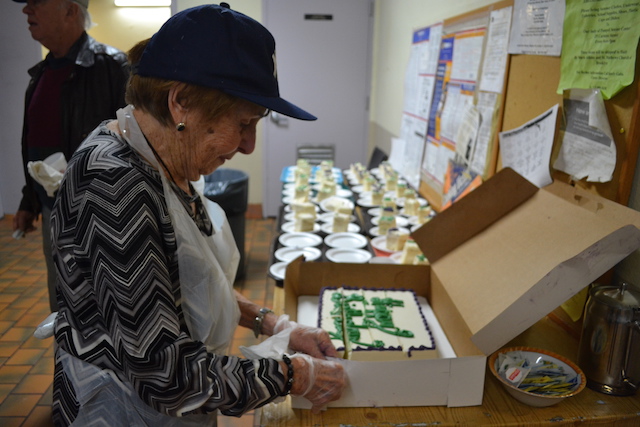 “This group of people—they come down here, they’re so happy, they eat, they do exercises, we have entertainment,” Josephine said. “So I fight, I fight for them.”

Other seniors told us what a vital part of the community the center was for them. 77-year-old Marcia said that it was almost a second home for many of the elderly. "These are the old-timers who need this place," she said.

Peyton Bell, a veteran who has done work for the church in the past, said the senior center is "like an institution. People come down here to socialize. This is one of the few senior citizen places where you can just hang around."

State Senator Brad Hoylman spoke about the ongoing dispute between Our Lady of Pompeii Church and the Greenwich House Senior Center at last week’s Community Board 2 meeting in Manhattan.

“Like a lot of negotiations, half of the battle is getting two people in the same room,” said Hoylman.

On Monday, Hoylman told us he’d been in communication with the archdiocese and hopes that Greenwich House CEO Roy Leavitt and Father Walter Tonelotto can meet to work out an agreement soon.

“We have an obligation to the seniors who helped build our community in the Village, and who use the center everyday from everything from hot meals to social service, to legal help. The senior center has been at Our Lady of Pompeii for over 40 years, and it’s centrally located. It would be very difficult for Greenwich House to find another location, especially in the time frame that’s been given,” said Hoylman.

Gabin was hopeful the combination of increased support from elected officials and promising words from the film community would sway Tonelotto to allow the center to stay. “[Greenwich House] came to [the church] about a rent increase, capital improvements, you know. And [they weren't] interested. So we’ll see," she said. "There’s a lot of political pressure."

The Church did not respond to our requests for comment.

#brad hoylman
#greenwich village
#Our Lady of Pompeii Church
Do you know the scoop? Comment below or Send us a Tip