Leak thanks to construction drilling a hole in a water pipe. #rentstabilized #greenpoint

By now, New Yorkers have become all too familiar with the gentrification playbook: A faceless landlord buys up an aging low-story apartment building in an up-and-coming neighborhood, rent-stabilized tenants are bought out, and the ones who stay endure a series of humiliating conditions ranging from the inconvenient (locks to the front door changed without notice) to the brutally inhumane (extended periods without heat and hot water.)

The five remaining Greenpoint residents at 97 and 99 Clay Street, a cluster of four buildings with 25 units, say their landlord has subjected them to these harassment tactics and more for over a year. Altogether, the two buildings have racked up over 100 housing and building code violations, according to city records.

Descriptions of the open housing violations at the buildings include exposed wiring in public areas, leaking roof, roaches, broken or defective lock on vestibule door, defective smoke alarms and carbon monoxide detectors, among other issues.

On Monday, the group staged a press conference with St. Nicks Alliance, a tenant rights group, to put pressure on their landlord, who manages the buildings through a company called Perfect Management, LLC.

“We’re not asking for anything extraordinary,” said George Manatos, a 37-year-old video editor who has lived in one of the buildings since 2010. “I’m not fighting for personal gain. I’m fighting for my rights.”

Reached for comment, a representative for Perfect Management said no one was available to speak on the issue.

In May 2018, city's Department of Buildings slapped the landlord with a $2,500 fine for falsely stating on an official filing that the buildings were unoccupied and that there were no rent-stabilized tenants. According to the DOB database, the fine is yet to be paid.

Rolando Guzman, an organizer with St. Nicks Alliance who has been working with the Clay Street tenants, said that, to his knowledge, the Department of Housing Preservation Development has not assessed any fines on the owner. The city agency is responsible for ensuring that all rentals in New York City are habitable. A call requesting comment from HPD was not immediately returned.

City property records show that the buildings were purchased in November 2014 for $6.5 million by an entity known as LJC Towers LLC. According to the HPD database, the LLC's head officer is Yoel Gross.

Shortly after the change of ownership, Manatos said the landlord installed new locks on the front doors without any notice.

“We had to break into our own building,” he said. “That was really a tone-setter for us.”

Manatos said the landlord proceeded to allow the building to fall into neglect and disrepair. As an example, he said windows in vacant units were kept open, resulting in water damage and stray animals moving in. Over time, tenants began moving out and their empty apartments were demolished.

Things took a turn for the worse starting in late 2017, he said, when the landlord began renovating the vacated units, resulting in a string of leaks as well as power outages and lack of hot water.

"From Christmas to early January he had to live without heat and hot water," he said. He has also regularly had to wipe down a layer of dust in his apartment resulting from all the ongoing construction.

In recent years, unsafe and unusually disruptive construction has become a commonly used landlord tactic to harass tenants, said Guzman, who has been working in North Brooklyn for 15 years. Among the more recent notorious examples: a number of East Village buildings, whose owners include President Donald Trump’s son-in-law Jared Kushner, where gut-renovations of vacant units have allegedly produced hazardous levels of lead dust.

“It’s a pattern we are seeing,” Guzman said. He added that Monday's event with Clay Street tenants was intended to “send a message to everyone in New York City that construction harassment against tenants is not tolerated.”

Guzman said that while tenant harassment is "insidious" and sometimes operates within legal limits, he has seen the city's oversight agencies improve their efforts in recent years. During his state of the city address last Thursday, Mayor Bill de Blasio announced a plan to crack down on landlord abuse with the launch of a new agency called the Office to Protect Tenants. The new arm of government, which will have a $450,000 budget and staff of five, will help the DOB, HPD and other city agencies mount a coordinated response to landlord harassment.

Although small in number, the rent-stabilized tenants at Clay Street are prepared to dig in their heels. 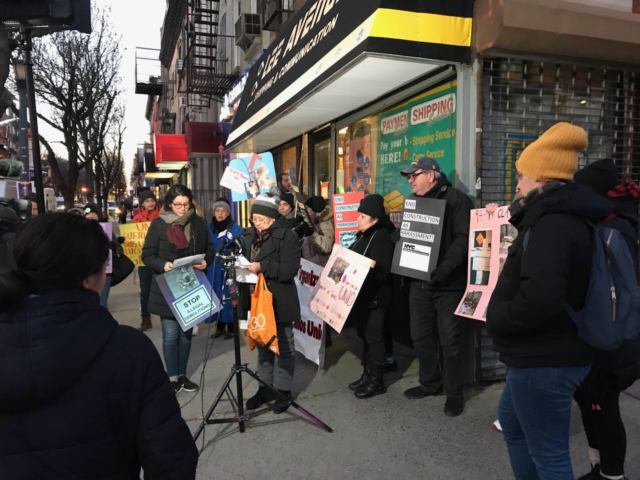 Greenpoint tenants from 97 and 99 Clay St. on Tuesday staged a press conference on Lee Avenue to accuse their landlord of harassment. (Photo by George Manatos)

Mongrain, a 36-year-old who works as a retail manager for Harley Davidson, said the group of tenants had talked for a while about using Instagram to document their living conditions. But everyone was too busy. Then on December 30th, she came home from work and discovered there was no heat and no hot water.

“I guess that was the straw that broke the camel’s back,” she said.

Mongrain, who has lived in her apartment for 10 years, said that staging a fight against landlord harassment amounts to a “full-time job.” In addition to filing the 311 complaints and reaching out to community members and activists, she has had to make time to be home for city inspectors who need to come and assess the violation.

“You can’t get a violation if you don’t let HPD into your apartment,” she said.

Mongrain said she currently pays $1,200 a month for her studio. For many longtime residents, rents in the North Brooklyn area have become increasingly out of reach. The monthly median rent in Greenpoint was $2,800 as of October, a year-over-year increase of 3.6 percent, according to Streeteasy.

While she said she has at times considered moving out, the five remaining tenants have since banded together.

“We are the last ones and we are not leaving,” she said.