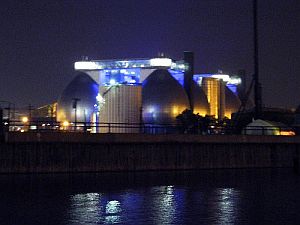 The eight towering sludge digester eggs at the Newtown Creek Wastewater Treatment Plant in Greenpoint got even more sci-fi looking last night when the DEP flicked the switch on the new dramatic blue lights illuminating the 145 feet high structures. True to form, New York Shitty was there to get total coverage on the lighting ceremony.

And what a wastewater lighting ceremony it was! There was free cake with the digester eggs – which each process three million gallons of sludge – designed onto the icing, and an introduction by the light's designer Hervé Descottes.

There was even a cameo by DEP commissioner Emily Lloyd, who promised that “people from the Empire State Building observation deck will be able to gaze upon our festively colored sewage treatment plant every night.” So hurry over to the observation deck now before they start charging extra for the view east!