The NYPD is investigating two assaults on women in Greenpoint last week—one in the early morning hours of September 13th, and a second in the early evening of September 14th. Both incidents took place near McGolrick Park and prompted a cascade of warnings and commentary from local residents on social media, including allegations of rape that an NYPD source said have yet to be confirmed.

No suspects have been identified, and the NYPD has not issued a release to the press on either incident.

On the morning of September 13th between 2:00 and 2:30 a.m., police believe a 34-year-old woman was assaulted by a group of people—all males of indeterminate age—on Sutton Street between Nassau and Driggs Avenues.

"She sustained cuts and bruises to her neck and hip area," an NYPD source said. "As it stands right now, there is no confirmation as far as a sexual assault." The source added that the victim did not immediately contact police. Officers responded to Beth Israel to question her the next day, after the victim apparently called the Special Victims Unit. He could not immediately confirm if a rape kit had been administered.

"It would appear that the bruising and the laceration or cuts that she suffered on the neck or the hip area were consistent with a physical assault and not a slashing or a stabbing," the source added, stressing that the information is preliminary.

A message posted on Facebook on the 15th and reposted numerous times since describes the assault as a rape committed by a group of teenagers. It states that the victim was also stabbed in the side of her neck. The author of the post, Bianca Buchanan, told Gothamist that the victim is her friend, and that the two have been in close contact. The victim could not immediately be reached for comment.

According to the NYPD source, details pertaining to the case are thin and preliminary. Police have reviewed surveillance footage from the area and have not turned up any footage of the alleged assault, he said. Cops also have yet to track down any potential witnesses. Additionally, police had "some degree of difficulty with the complainant/victim in the incident, as far as conducting a thorough interview." Asked to elaborate, the source said that the victim was allegedly intoxicated at the time of the assault, and did not have a clear account of the events.

Buchanan said that she had seen the victim's injuries, and that they were more serious than the police report indicated, including extensive bruising on her thighs and a deep gash on her neck. According to Buchanan, the victim said cops unfairly reprimanded her for going home after the assault rather than going straight to the hospital, and for being intoxicated and walking home alone.

*EDIT - WE HAVE TO CLOSE COMMENTING HERE. PLEASE DO NOT TAG PEOPLE IN THIS POST BUT INSTEAD SHARE VIA DM. PLEASE NOTE THAT A LOT OF NEIGHBORHOOD PEOPLE ARE AWARE AND WORD IS SPREADING. STAY SAFE. WE ARE NOT IN DIRECT COMMUNICATION WITH THE SURVIVOR, SHE IS A FRIEND OF SEVERAL FRIENDS. WE JUST WANT TO HELP OUR NEIGHBORS STAY SAFE. AND THE DELI ON THE CORNER OF SUTTON HAS BEEN INCREDIBLY HELPFUL AND SUPPORTIVE. LETS ALL FOCUS OUR ENERGY ON POSITIVE THOUGHTS FOR THE SURVIVOR ❤️* Heads up Greenpoint residents. Here's some more info: "hi everyone, thank you for your concern. few more details: it was early morning of September 13th around 2/2:30 am. she was unable to get a good look at the attackers but she says they were white or light skinned Hispanic. she thinks at least one of them was a polish neighborhood kid." #greenpoint #brooklyn #11222 #11211 #williamsburg #northbrooklyn

Last week Gothamist spoke to Kristine Wilson, 36, a Williamsburg resident who said she was knocked to the ground from behind on September 14th, apparently by a group of teenagers, while walking from her car to an acupuncture appointment on Driggs Avenue near McGolrick Park.

"All of a sudden I felt like a car hit me from behind. Just smashed me," Wilson said. "I felt thrust against the wall. I was walking and they pushed me to a wall, and I fell on the ground."

Wilson said that she didn't see who hit her, but believes it was multiple people. "I heard a little bit of laughing as they went away," she said. According to Wilson, a man who said he was a bouncer at the Warsaw came up and asked if she was okay. "He said it was teenagers, a group," Wilson said. "He said they just came up behind me and threw me."

"I hurt my shoulder, and I have bruises on my left arm and head," she added. "I didn't go to the hospital, but as the days go on I'm feeling more sore." Wilson called 911 from the scene and filed a police report, but said she hadn't gotten any updates as of Monday afternoon.

According to the NYPD, Wilson was walking west near 164 Driggs Avenue around 4:40 p.m. that day when an unknown perpetrator "approached from behind and shoved her to the ground." The suspect then fled north on Diamond Street. Police could not confirm the allegations about teenagers, or whether the perpetrator was with a group. 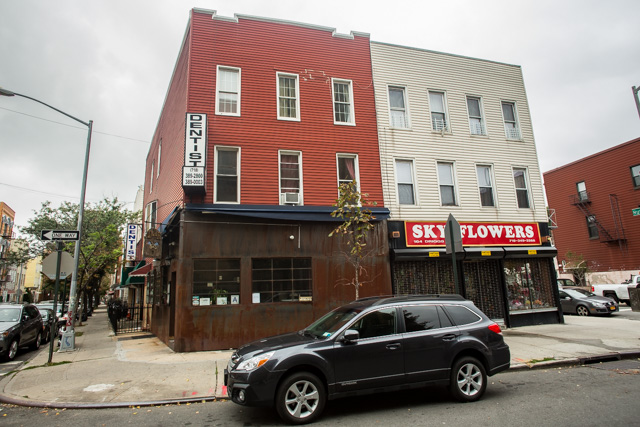 Wilson said she was knocked to the ground on Driggs Avenue around 5:00 p.m. on September 14th (Scott Heins / Gothamist)

As citizen reports of both attacks circulated last week, many Greenpoint residents speculated that the two attacks were related, and said they believed the perpetrators were a group of teenagers. A community meeting has been scheduled for Thursday evening to discuss the incidents, and "how to proceed in creating a safer neighborhood." 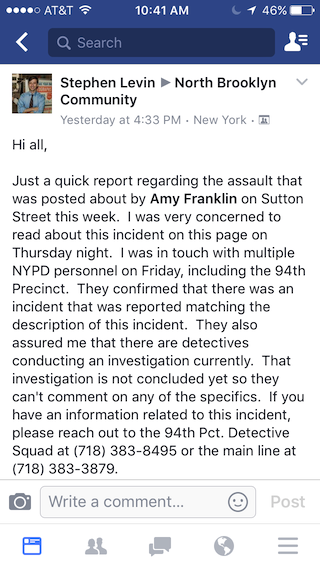 "The attackers are apparently a group of teenage males terrorizing the neighborhood," wrote Lilly Frances on the Facebook page North Brooklyn Community. "Let's try to get these scumbags off the streets."

Gothamist received numerous tips about the alleged rape, the majority of which traced back to Buchanan's post.

Buchanan is "a friend of mine, and she's a friend of the victim," Fox and Fawn co-owner Beverly Ragon told us last week, after her shop posted Buchanan's account. "There's nothing I can say beyond that. The info I have gotten is from her."

Local Councilmember Steve Levin commented on the North Greenpoint Community page last week, saying that he had contacted the 94th Precinct upon reading Buchanan's post, reposted by another local resident. Levin said that he confirmed an incident "matching the description" of the one described in the post, adding that the investigation "is not concluded yet so they can't comment on any of the specifics."

Reached on Monday, Levin's office declined to comment on the record.

According to the NYPD source, not enough evidence has been gathered to determine whether the two assaults might be connected.

In the meantime, Wilson said that she is hoping to get in touch with the other victim to compare experiences.

"It just seems too coincidental," she said.