Green Fireworks For The 4th? 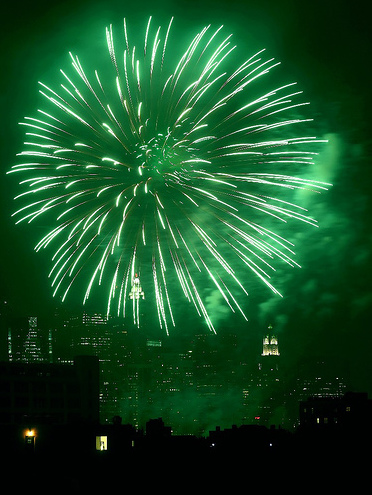 So now that we've told you all about the fireworks happening tomorrow night, we've got some bad news, and it's not about the impending weather, either. With all these red, white and blue bursts...we wondered if there's any room for green in the celebration?

Fireworks aren't traditionally environmentally friendly, and they "heavily contribute to perchlorate contamination of surrounding water bodies." Some parts of the country have adapted by using cardboard and paper mache, instead of plastic, to cover their fireworks. Josh Whiteis of J&M Displays says, "If (plastic) gets in the water, it sinks to the bottom. That can hurt fish, that can hurt people for that matter. If there's plastic in the park we don't want to hurt people walking around in bare feet. And so if the cardboard gets into the water, it disintegrates and it's gone." Macy's are loaded in steel and fiberglass mortars.

Not to be a downer, but Treehugger reports on even more problems, saying "fireworks are often propelled by gunpowder, and the accelerants and heavy metals used for coloration can leave traces in the air and water for days or even weeks after the party is over. The effects are worsened by muggy summer weather and its accompanying poor air quality."

So, why not sign the Live Earth Pledge to make yourself feel a bit better when you're enjoying those fireworks tomorrow. Live Earth will be taking place this Saturday and anyone who enters their name on the pledge will see it on screen or online during the concert.