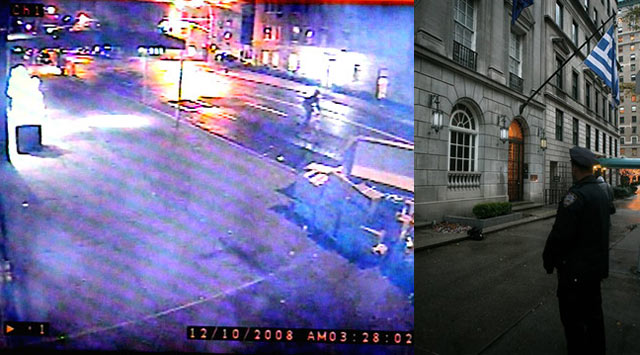 Surveillance video still at left (bicyclist can be seen in the upper right quadrant); photograph of the Greek Consulate from the AP

Early yesterday morning, a person riding a bicycle was caught on surveillance video throwing a brick at a window of the Greek Consulate—and spray painting on the East 79th Street building. And police are investigating whether this incident is linked to the bombings outside the British and Mexican consulates, as well as outside the Times Square recruiting booth.

Newsday reports the vandal "spray-painted in black 'Alex was here' and 'Murderer' and the anarchist symbol, a capital 'A' within a circle." "Alex" appears to be a reference to the death of 15-year-old Alexandros Grigorpoulos, a Greek youth who was killed by police and whose death has set off riots. No one was inside the Consulate at the time.

The NY Times reports, "Though no bomb was used, investigators said the attack bore striking similarities to attacks on the British Consulate at 845 Third Avenue in 2005, the Mexican Consulate at 27 East 39th Street last year and at the Times Square military recruiting station in March. Each occurred about the same time of day, inflicted little damage and caused no injuries. A bicyclist with a hooded jacket or sweatshirt was spotted at the scene of the attacks, and each appeared to have political motivations."

After the Times Square bombing, the police found the bike apparently used by the bomber. It was dumped a few blocks away.