Great News: Nobody Sleeps On The Streets Of NYC, Mayor Bloomberg Reports

If you're one of those delusional fools wandering around in a hallucinatory daze "seeing" homeless people everywhere in this perfect city, please allow the honorable Mayor Michael Rubens Bloomberg to lift the veil from your weary eyes. Those apparitions which appear to be sad human forms reclining on the sidewalk in the dead of winter ARE NOT REAL la la la, the mayor announced yesterday. In response to a question about the city's homeless shelter system turning people away, Bloomberg actually said, "Nobody's sleeping on the streets." In other news, nobody's stopping the Mets from winning the World Series this year. 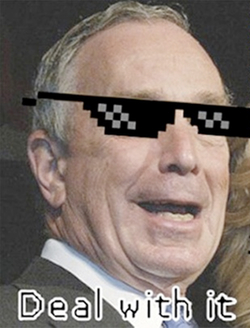 Bloomberg has been criticized by homeless advocates for a change in the city's “code blue” status, which eases shelter restrictions on frigid nights. The Bloomberg administration has also tried to require single adults to prove that they have nowhere else to go before being admitted into a homeless shelter, but an appeals court recently upheld a City Council challenge to that policy.

The city's "code blue" rule has traditionally waved restrictions for people seeking shelter on nights when the temperature dips below freezing. But recently the restrictions were tightened for certain families who are reapplying for shelter. Junior Clarke, 23, tells the Daily News he was turned away from a Bronx homeless intake hub during a cold snap last month, along with his family. "They tried to send us outside into the cold,” Clarke told the tabloid. “They threatened to have us thrown out by police.”

Asked about Bloomberg's remark yesterday, his Deputy Press Secretary Samantha Levine told us, "Our policy which, as usual, provides shelter to anyone who doesn’t have a place to stay, is not resulting in anyone sleeping on the streets." According to NYC's official count, more than 3,200 homeless people were on the streets in January of last year. Homeless advocates say the number is much higher, but they're probably "just seeing things."

#homeless
#homelessness
#mayor bloomberg
Do you know the scoop? Comment below or Send us a Tip