This is the second time today Sarah O’Neill is sitting down to write postcards.

The flip side of the one she’s filling out has a picture of Min, her fleecy, sweet-looking pet schnoodle (that’s half Schnauzer/half poodle), with a speech bubble barking, “Please vote!”

She’s been speaking in quick, excited bursts to her fellow postcard writers—10 people gathered around a volunteer’s dining table somewhere in the East Village. Her family says she speaks at hyperdrive speeds when she doesn’t get enough sleep.

In these final days before the state primary, hundreds of New Yorkers will be getting a similar handwritten postcard in the mail. They’ve been sent by volunteers for Postcards to Voters, a now nation-wide effort to encourage Democrats to vote.

Listen to WNYC's Shumita Basu talk to these volunteers about the personal touch they are giving the campaign season:

Get-out-the-vote mailers are not a ground-breaking idea. But the key to Postcards to Voters is twofold: one is those personalized cards, in all of their handwritten and sometimes-sloppy glory. And the second is a list of addresses belonging to prospective Democratic voters across the nation. That list is painstakingly put together by a guy they call Tony the Democrat. 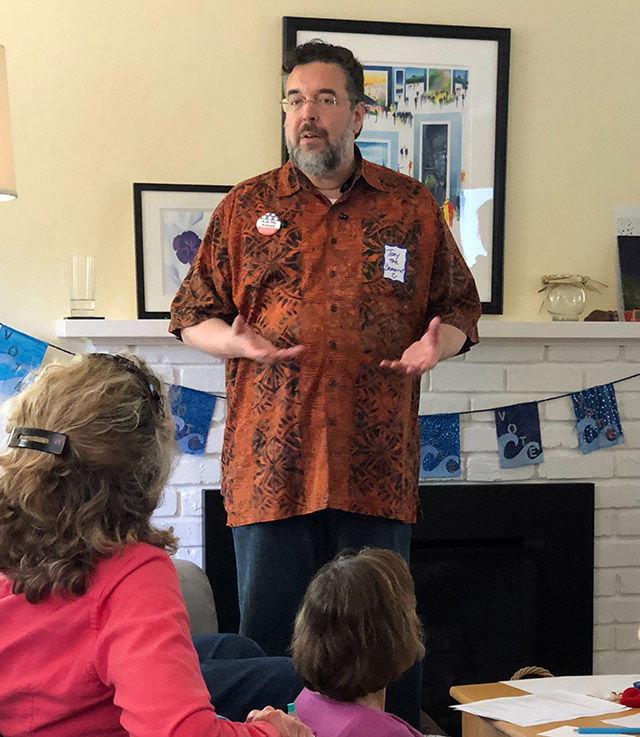 His real name is Tony McMullin.

“I am, I think it’s safe to say, the first first-generation Cuban-American, born in Nebraska, grew up in Kentucky, went to college in Miami, then moved to Dallas…” he told WNYC, rattling off the list. He now lives in a suburb of Atlanta, Georgia.

Tony has a real day job, but over the past 15 years he’s held a combination of paid and unpaid positions working for political campaigns.

He says he kinda accidentally started this postcarding thing in March of 2017, when Jon Ossoff was running for Congress in a special election where he lives, Georgia’s 6th district. Some out-of-staters had posted words of support on Ossoff’s Facebook page, saying they wish they could do more than just write a check.

“So I told them they were in luck because I happen to have, as a volunteer here locally, a list of terrific Democratic voters in the district that have an awesome record of voting, but they would need to be reminded that there was a special election in April,” Tony told WNYC.

It was a spontaneous suggestion. And more and more people took him up on it.

Ossoff ultimately lost that race. But the postcard writers reached out to Tony and said: So, who are we writing for next? That’s when he decided to take his efforts nationwide, writing to Democrats all over the country to remind them about special elections and primaries.

“This is not a postcard to persuade somebody to switch parties and vote for a Democrat. That’s not what we do,” Tony said. "We only write to Democratic voters to remind them of an upcoming election where there's only one Democrat on the ballot.”

This particular group is writing to New Yorkers whose state senators used to be part of the now-defunct Independent Democratic Conference, or the IDC. That’s the group of renegade Democrats who were cooperating with Republicans in the State Senate. The postcards say — Hey, just so you know, your incumbent has a Democratic challenger that you should vote for. 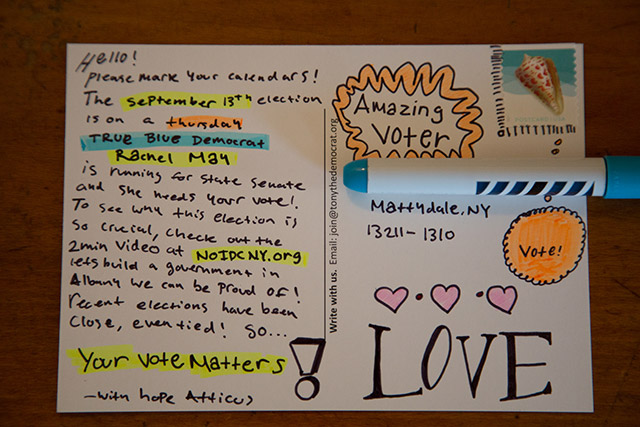 But how do you make sure you’re only writing to Democratic voters? Well, one of the skills Tony picked up in his campaign work is sifting through voter files. These are big, unwieldy digital files that you can request from a state, with names of voters, their addresses, which elections they’ve voted in.

“I’ve lost track of the number of voter files I’ve worked with over the years,” Tony told WNYC. “It really does not take me more than 30 minutes to slice and dice a voter file.”

But you have to slice carefully, says Tony. Political party affiliations are sometimes not included in these voter files, so he has to make inferences by studying which elections people turned out for over the years.

“You really want to make sure that the addresses are the right voters. The last thing we want to do is remind any voters of the other party about a special election,” he said with a chuckle. “That’s someone else’s job.”

Tony now has a team of volunteers. Eighteen thousand people have signed up to write Postcards to Voters across the country. They work for free, and they buy their own supplies, including the stamps. They’ve sent about 2.7 million pieces of mail for 106 campaigns in the last year and a half. One of the volunteers even built Tony a bot that sends new addresses to his writers when they ask for more.

It seems like the appeal of postcarding is that it can be done anytime, with or without a group. Someone on Twitter described it as “resistance for introverts.” And the Facebook page and hashtags that have sprung up around Postcards to Voters are overwhelmingly positive spaces. Which maybe comes from a cardinal rule of the cards: never go negative.

“We never use the word Trump or Republican,” explained Tony. “We never call out the opposition candidate in any of our talking points. I will actually reject talking points that are negative in any way because this is supposed to be a fun, friendly election reminder.” 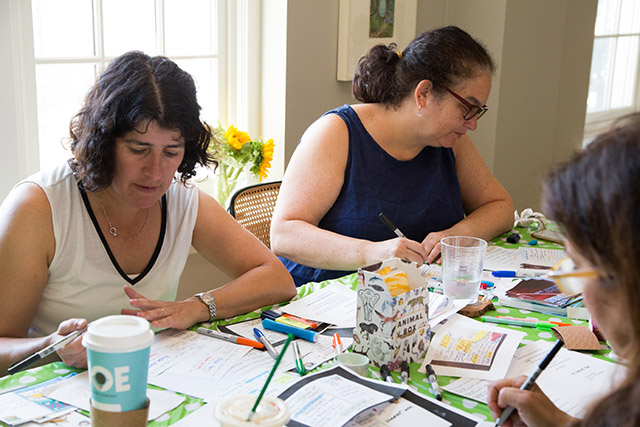 It’s one thing to feel good about writing these postcards. It’s another thing to understand if they actually work.

David Nickerson, a political science professor at Temple University, has conducted experiments to put numbers behind efforts like door-knocking and phone-banking. He’s worked on campaigns for the past two decades. When it comes to direct mail, he says the most effective strategy is shame.

“Usually what works best is a very plain boring government-looking letter that says, ‘You didn’t vote in the last election, please vote in this election,’” said Nickerson.

He says for standard campaign fliers—those glossy, full-color missives from campaigns - there’s actually a formula: you can expect one piece of printed mail to boost voter turnout by about half a percentage point. So that’s 5 votes for every 1,000 mailers sent.

A 2007 study showed handwritten notes are about three times as effective.

Nickerson says that’s because of the novelty of a person in upstate New York getting a letter from Oregon. The more personal the method is, the better it is at getting voters to participate.

“Like, how often do people get handwritten letters nowadays? It’s pretty rare,” he said.

Over 283,000 postcards have gone out to New Yorkers ahead of tomorrow’s state primary. A few weeks ago, a woman in District 38 — that’s Rockland County — got one in the mail. She spoke to WNYC, but did not want to be identified by her real name because she’s worried that publicizing her political views could have an impact on her job. We’ll call her Tara.

“So the postcard starts out, ‘Hi from Susan from Oregon,’” said Tara. “And then goes on to inform me of a candidate Julie Goldberg, who is running against my current NY State Senator David Carlucci.” 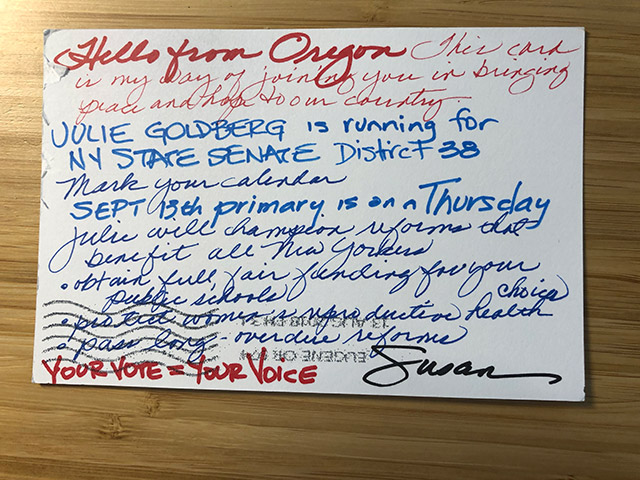 Tara says she voted for Carlucci in the past without thinking twice. But the postcard mentioned that Carlucci was an IDC member. She’d never heard that term before, so she looked up his voting record.

“You get the mailers from your candidate once a year talking about all the great stuff they’ve been doing or co-sponsoring, and they never mention they let it die in committee because of their buddy-buddy relationship with the Republicans,” said Tara. “You know, it’s alarming.”

Carlucci has been asked about the IDC often on the campaign trail, including during a September 1st debate with Goldberg broadcast on “NewsBreakers” on Fios1News.

Tony the Democrat says he doesn’t usually take sides in Democratic primaries, but he made an exception to oppose New York’s IDC incumbents. He says the best feeling comes from watching candidates his volunteers have supported win really close races, where a couple hundred votes made the difference.

“I’ve received so many responses from people telling me that they didn’t know about the special election, thank goodness for the postcard,” said Tony. “They show candidates when they come knocking on the door. That means they saved the postcard! They kept it! They put it on their kitchen counter and have been looking at it multiple times a day! That’s direct marketing gold.”

The deadline to mail postcards to New York was last Thursday for out-of-state senders, Friday for in-staters, so the letters would reach people before Thursday’s primary. They’ll take a little break, then start writing for candidates in the November elections, starting with Texas, very soon.

Keep up with WNYC & Gothamist's midterms coverage with our elections hub. You can stay informed by subscribing to our new midterms newsletter and getting text reminders about important election dates.

#get out the vote
#postcards to voters
#original
Do you know the scoop? Comment below or Send us a Tip